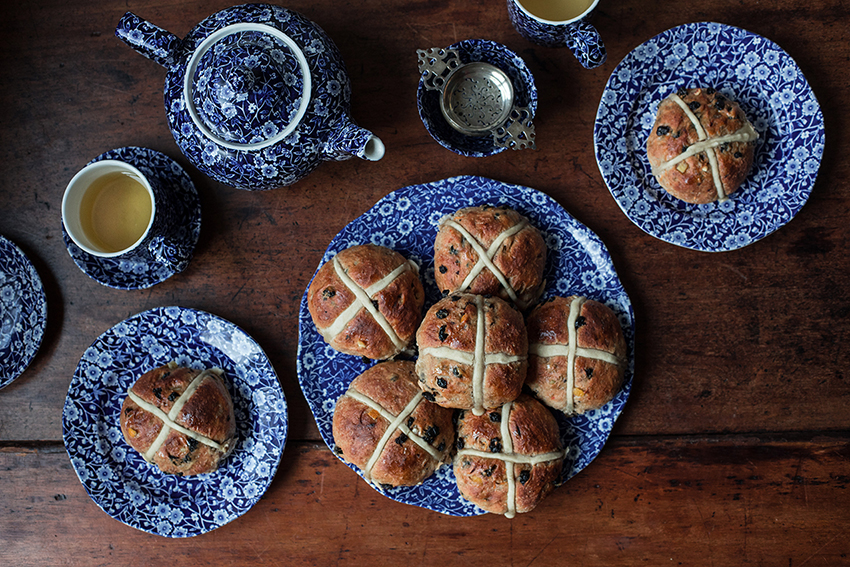 The first recorded reference to ‘hot’ cross buns was in ‘Poor Robin’s Almanac’ in the early 1700s.

‘Good Friday come this month, the old woman runs. With one or two a penny hot cross buns.’

This satirical rhyme was also probably the inspiration of the commonly known street vendors cry:

If you have no daughters, give them to your sons, 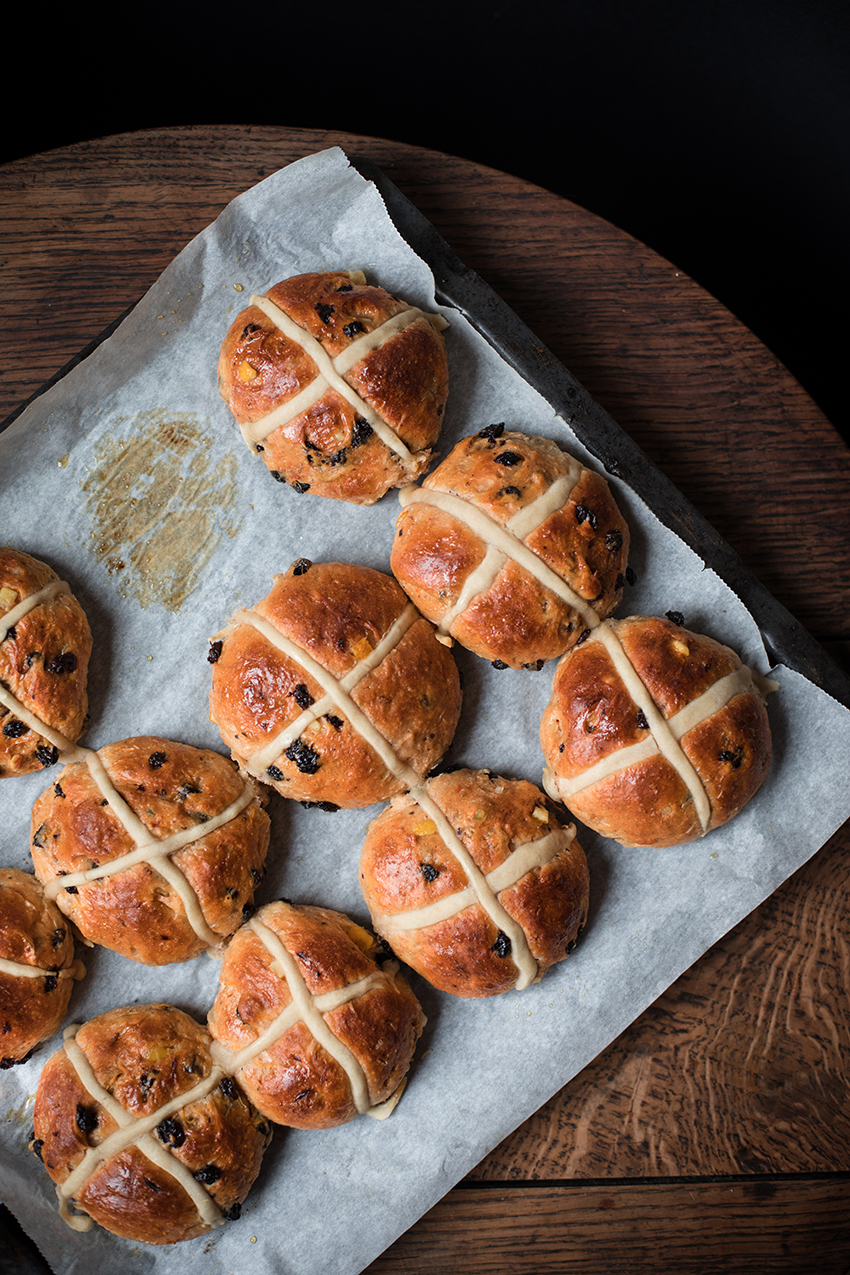 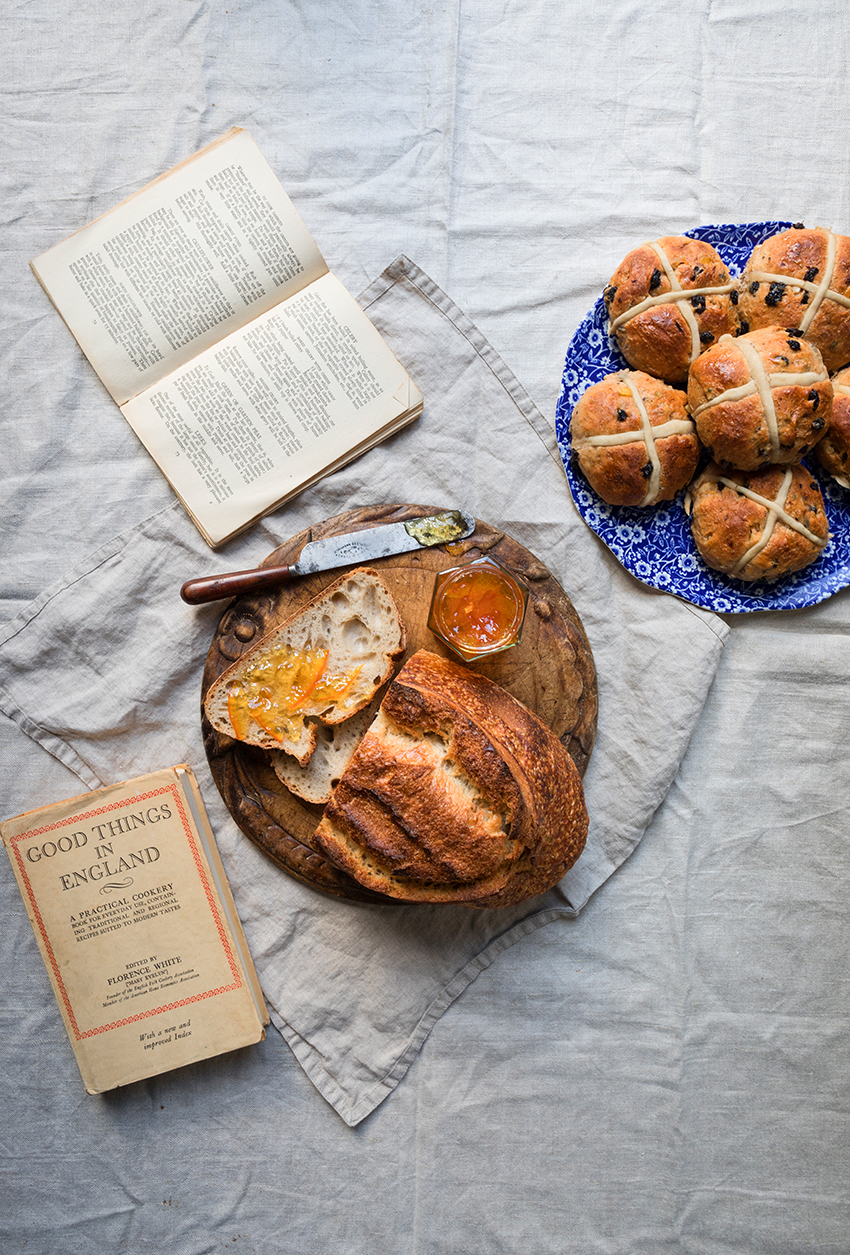 A century later the belief behind the hot cross bun starts to get a superstitious rather than a religious meaning.

In London’s East End you can find a pub called The Widows Son, named after a widow who lived in a cottage at the site in the 1820s. The widow baked hot cross buns for her sailor son who was supposed to come home from the sea on Good Friday. He must have died at sea as he never returned home, but the widow refused to give up hope for his return and continued to bake a hot cross bun for him every year, hanging it in her kitchen with the buns from previous years.

This recipe is a revised version from one that appeared years ago on this site. I advise to use this one.

So here is how you bake your own:

For the shiny glaze:

**Optional: I like to add 100 grams of finely grated carrot (weighing the carrot before grating) which I think is a nice addition to the bun without taking away too much from its traditional character.

Warm the milk to body heat and chop in the butter to melt, stir.

In a large bowl, combine the flour, yeast, sugar and spices. Make a well in the middle and pour in half of the milk & butter mixture and the egg, knead (using a mixer with the medium speed, dough hook attached) for a short while, then add the rest of the milk until everything is combined and you don’t see any dry flour left.

When the dough has rested add the dried fruits and candied peels and use your hands to work them into the dough or use your mixer on a very low speed.

Place the dough in a large bowl or leave in the bowl of the mixer and cover it, I re-use those plastic shower caps you get in hotels. Leave to prove for one to two hours, until doubled in size.

In the meantime prepare a large shallow baking tin by lining it with baking paper. This is also a good time to prepare the mixture for the cross topping. Combine the flour and the water and add to a piping bag.

After resting, divide the dough into 12 even pieces and gently shape into balls. Place these balls evenly spaced on the baking paper and leave to rest in a warm place for another 30 minutes to one hour (until about doubled in size) covered with a clean damp cloth or plastic bag.

The buns should be doubled in size by now – carefully pipe the cross to each bun by using the piping bag and the mixture you prepared.

Bake the buns in the middle of the oven for 20-30 minutes until they are golden brown.

Prepare the shiny glaze by heating up 2 tbsp of water with the sugar or heating up the golden syrup with a teaspoon of water.

Remove the buns from the oven; brush them with the glaze to give them that lovely shiny finish.

The day after they can easily be heated in a hot oven for a few minutes, or 10 seconds in a microwave.

Freeze for up to a month. Leftover buns make a perfect Hot Cross Bun and Butter pudding, see my recipe here >

*Letting the dough rest for a while without salt is called an “autolyse”. It allows for enzymes to do part of the gluten development before you start to actually knead it. Adding salt with the yeast can kill it or slow down the process. This way it forms a developed dough more quickly.

Previous Post: « Bitter Seville Orange Marmalade – A Potted History and How to Make it
Next Post: Ghent, the rock ‘n’ roll alternative to Bruges in Belgium »