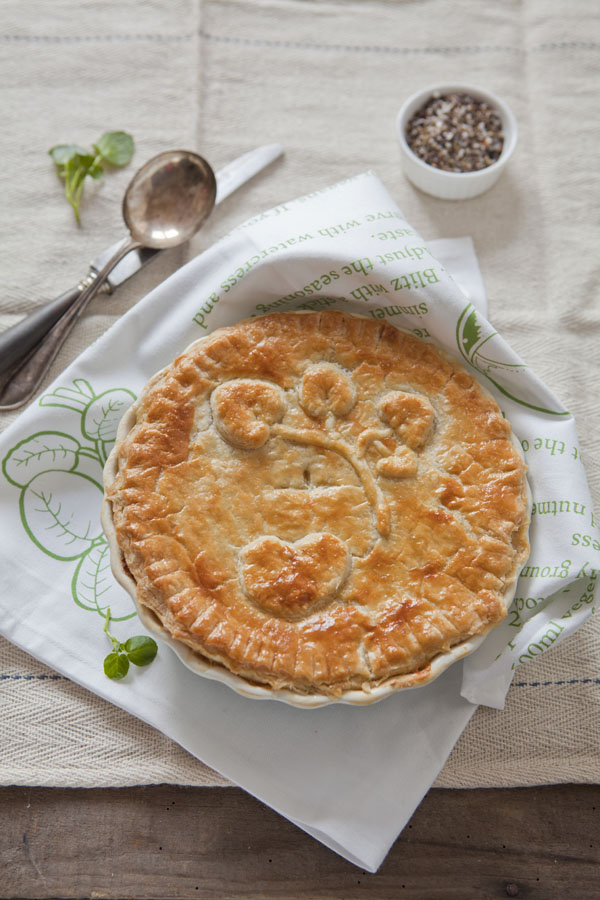 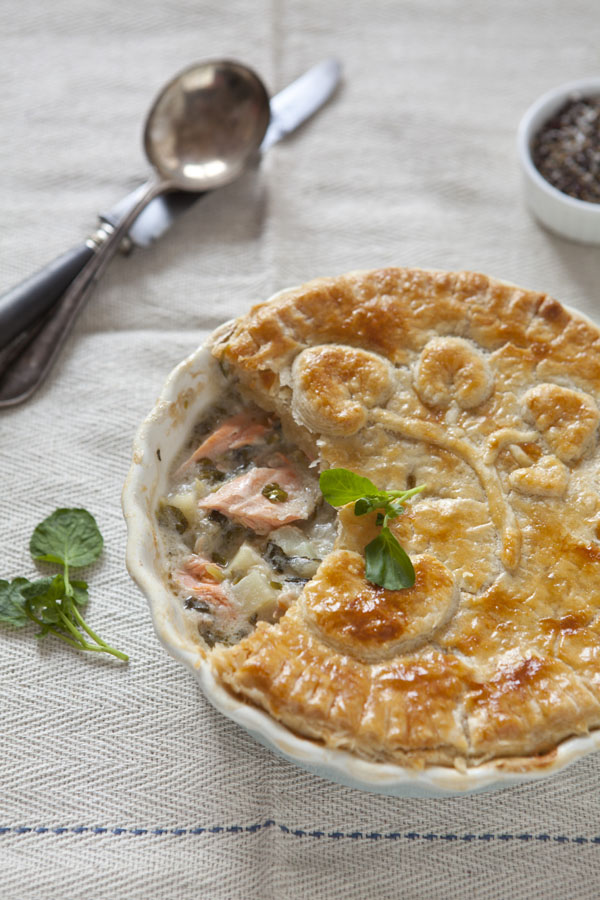 ‘British weather is perfect for watercress’ the words of Steve … my host at the watercress farm in Hampshire.
Britain is one of the few countries to grow watercress and has been for hundreds of years. As far back as the 1600’s and most likely even earlier it was foraged in the wild where it grew in streams and rivers but as from 1808 it was first commercially cultivated by  William Bradbery, along the River Ebbsfleet in Kent.

The success of the watercress trade is very much entwined with the British railways. In 1865 the ‘Mid-Hants Railway’ or Watercress Line was opened, it connected Alresford to London giving Hampshire watercress growers the opportunity to get their crop fresh to the London markets. The delicate leaves would be picked by hand by the men and tied into bunches by the women to be placed in wicker baskets for the transport.
At London’s Covent Garden watercress would be sold by street vendors who often were children. The bunches of watercress were said to have been formed into posies and eaten like that for breakfast straight away or if you were lucky to be able to afford a loaf, between two slices of bread. In Victorian Britain it was called ‘the poor man’s bread’, it provided the working class with a good portion of nutrition for the day and became one of the first foods for on-the-go. 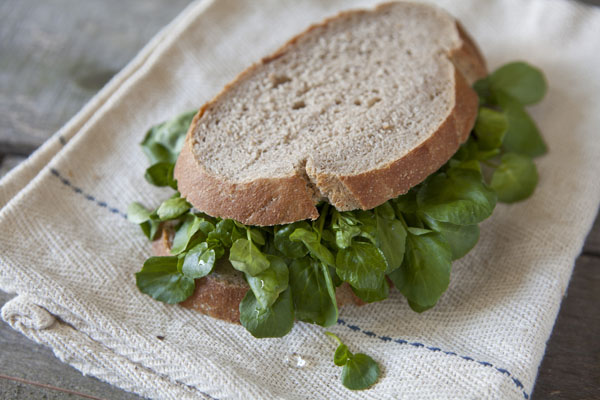 The Watercress Line declined during the years of the first and second world wars and gave her final blow to watercress growers in the 1960’s with the closure of the line.
Now a flourishing industry, watercress is gaining popularity again and Alresford even has a Watercress festival in may.
We now have Watercress all year round but it used to be a hardy winter crop, feeding off spring water that has a constant temperature of around 10° C, watercress is unaffected by frost.

The beds on this Hampshire farm are still the original ones from the 1800’s, they are cleared each year to keep the crop healthy and follow the natural line of the river benefiting of the natural spring water. Hawks and Falcons are used to chase away stealing pigeons and bats are set free to clean the beds of small insects that could affect the health of the crop. They very much work together with nature, preserving the wildlife that likes to reside around watercress and to keep the beds chemical free. 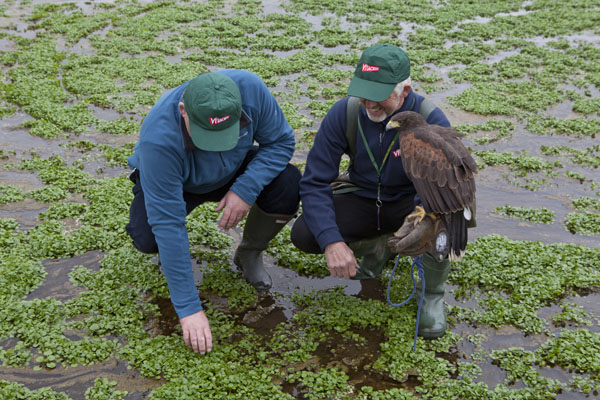 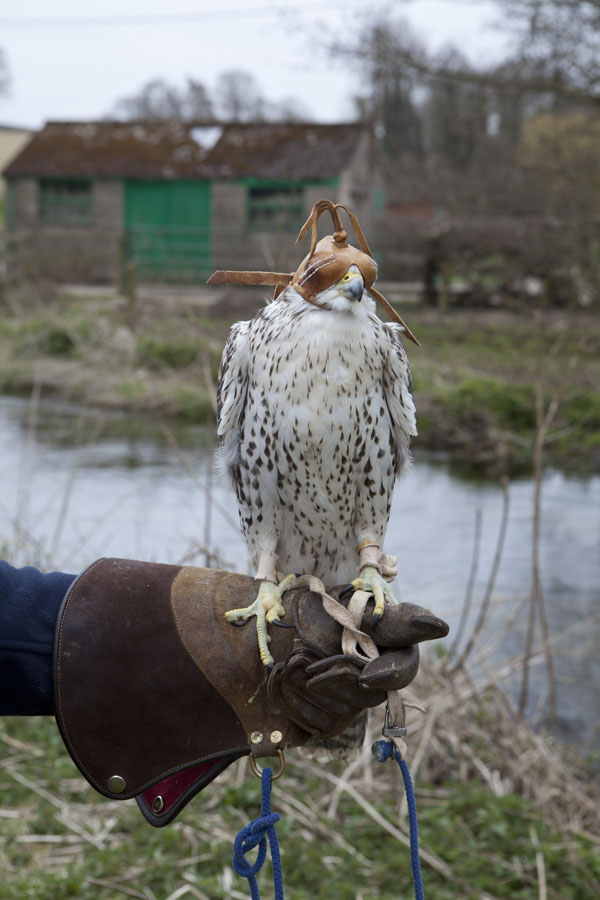 University
students are at the site to study this method as was Steve at one time
in his life. Steve has a PhD in the nutritional physiology of watercress
and his course was part funded by the watercress industry. He tells me watercress contains more vitamin c than oranges, more iron than spinach and more calcium than milk.
He himself swears by eating a few bunches, raw in his hand like the ‘Poor man’s bread’ every day and has done for thirty years.

The
watercress from Hampshire does taste perfectly peppery filling your
mouth and nose with mustardy warmth and then refreshing it with the
juicy stalks.
It has been a favorite on my plate for quite some time,
preferring it to Rocket salad. It is so versatile, like the ‘poor mans
bread’ straight out of your hand or just plain between two slices of
bread, spicing up your soups, salads and smoothies. I can’t get enough
so with my precious bunches the farm kindly gifted me I had a lovely
salad, a sarnie, an egg and a trout and watercress pie. (check back on friday for the trout and watercress pie) 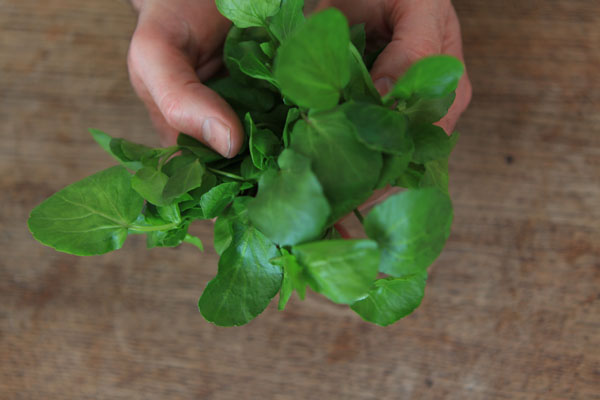 Watercress from the Watercress Alliance is sold all over the UK in supermarkets and market stalls. Have a play with this brilliantly British crop and I assure you that it’s mustardy bite will not let you go in a hurry. 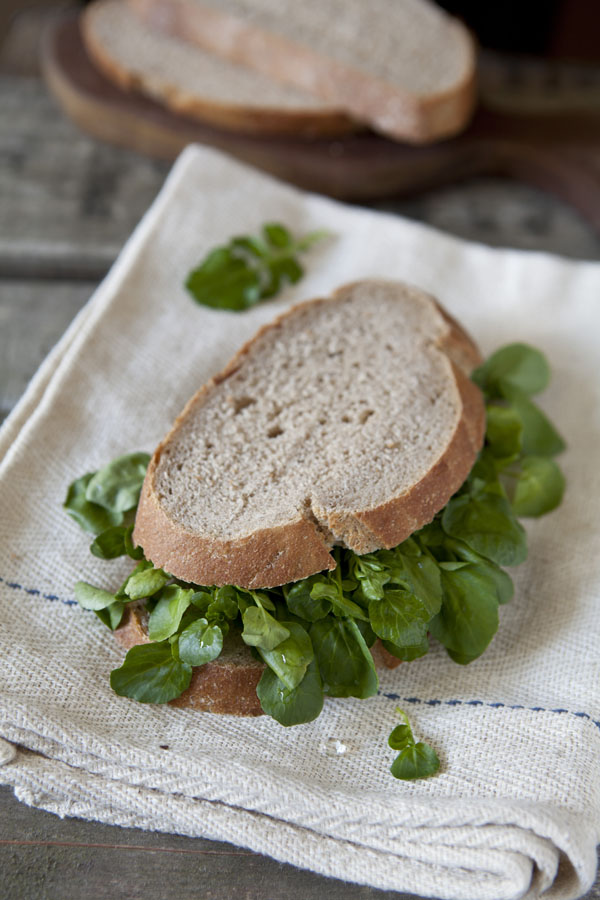 To make a slightly more luxurious ‘poor man’s bread’ adding actual bread, bake a loaf of bread, or buy a decent loaf from a local bakery.
Cut off a couple of slices and wrap in a tea towel.
Pick out a handsome looking, crisp bunch of British watercress at a store or farmstall. Take a walk in the countryside or if you are urban, a park. Search for a perfect spot, in the sun ideally, by a lake or a stream preferably. Have a seat and a breath in deeply, hopefully all you will smell is flowers blossoming and the sweet scent of spring grass. Unpack your slices of bread on you lab and on it place the bunch of watercress, I am not washing it.
Notice the vibrant green color before you take the first bite.
Peppery warmth will fill your nose followed by the sweetness of the bread and then the fresh juiciness of the stalks.
You will wonder why you always over complicate meals when it can be so simple. You will start to think what will go beautifully with this sarnie, some light cream cheese or just a generous spread of fresh farmhouse butter …
From now one watercress will always be on your list, because you can’t get enough.
Enjoy x