The feast of ‘Sinterklaas’ is on December 6 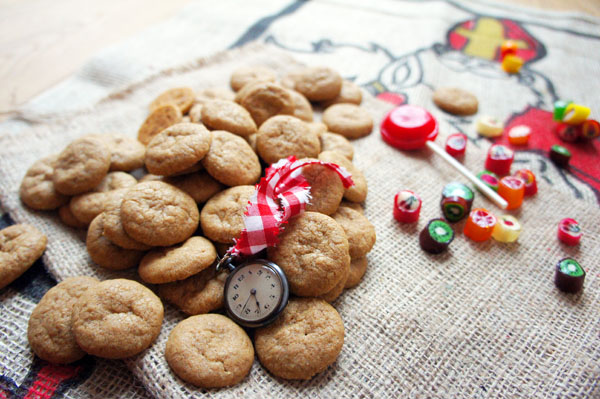 ‘Sinterklaas’ is a traditional Winter holiday figure still celebrated today in Belgium and the Netherlands and other parts of Europe.
Saint Nickolas is an elderly man wit a long full white beard. He carries a big book that tells whether each child has been good or naughty in the past year. He traditionally rides a white gray and delivers the gifts to the children by riding his horse over the rooftops assisted by his helper ‘Zwarte Piet’ (black Pete) who’s face is blackened from the soot of the chimneys.
Parallels have been drawn between the legend of ‘Sinterklaas’ and the figure of Odin, an important god to the Germanic people and worshiped in North and Western Europe prior to Christianization.  He was accompanied by black ravens, Huginn and Muninn, who symbolised the night – Odin himself was the embodiment of light.
Other European countries see their Sinterklaas accompanied by a black demon with a long red tongue, his name: Krampus. Naughty children would be punished by Krampus, just as Zwarte piet in Belgium and the Netherlands would stick the naughty children in their large hessian sacks and abduct them. Fear is always a part of ancient traditions, though in recent years the scary part has been completely erased in my area, focussing on not getting any presents if you’ve been bad, rather than being abducted in a sack by the blackened Zwarte Piet. There’s also been a lot of controversy surrounding the recent version of our black demon. At some point in the Netherlands, Zwarte Piet grew black curls to accompany his blackened face, the blackness now completely covering the whole body with black gloves and stockings to complete the look of an African lackey. The story had changed from that of the ancient natural religions of night and day, good and evil, to a story that Sinterklaas freed slaves in Spain who then pledged their allegiance to him out of gratitude. The image of Zwarte Piet was a happy one, he was always depicted with a broad smile, but behind that smile a lot of negative thoughts appeared and in the last decade it’s been frowned upon to dress Zwarte Piet with black curls and lackey clothes – and rightly so. Traditions change all the time, and there is no definite tradition of Sinterklaas, so this change from Zwarte Piet to Roetpiet – or Black Pete to Pete Soot is a good evolution of the custom.
For children it’s never about politics, but all about gifts and sweets. It is customary to put one shoe in front of the fireplace on the 5th of december. The evening is called ‘Sinterklaasavond’ or ‘Pakjesavond’ (boxing evening). Carrots, turnips or apples are put in the shoe as a treat for ‘Sinterklaas’ horse. Sometimes a bottle of beer would be left for Zwarte Piet. The next morning the carrot would be gone, the beer bottle empty and the children may find candy or a small present in their shoes.
When I was a child I used to go and choose the best looking and largest carrot and turnip at the market. The next morning, there were chunks bitten out of the carrot and turnip and the beer bottle was empty. How magical!
We all knew there was no ‘father christmas’, ‘Santa’ or ‘Santaklaus’ but we were firm believers of ‘Sinterklaas’. I remember the disappointment I felt when I found out ‘Sinterklaas’ didn’t exist. I was in bed, trying to stay awake so I could see ‘Zwarte Piet’ as he came down our chimney. I didn’t see him, I heard my parents whispering about my present and assembling the dolls house I’d asked for. The disillusion was gigantic and I remained shocked for days. I didn’t tell my parents “I knew” until the next year when they told me themselves, I desperately wanted to hang on – I wanted to believe.
In Belgium they say finding out that ‘Sinterklaas’ doesn’t exist is the first disappointment you have in life. After that, you are a big girl or boy. 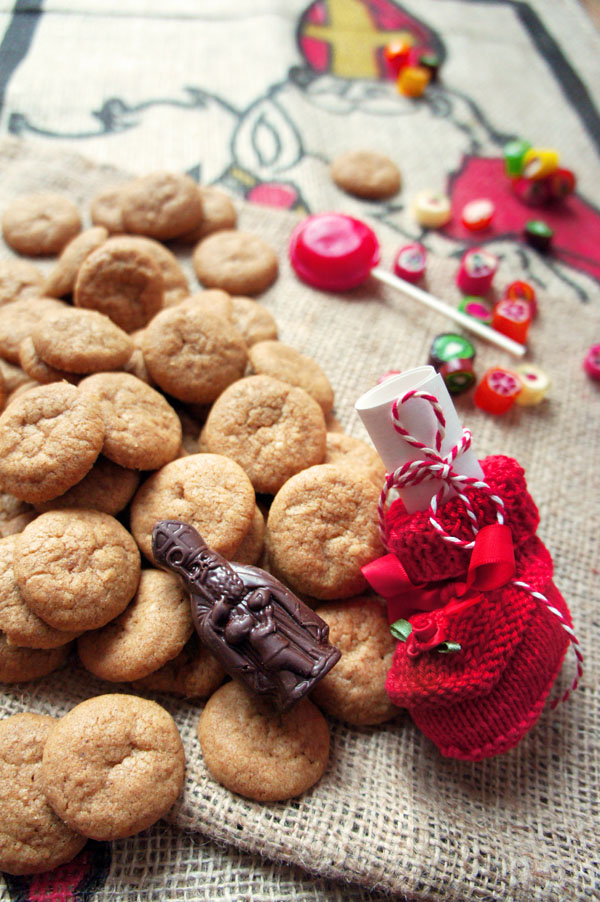 Typical ‘Sinterklaas’ treats traditionally include: mandarins, oranges, kruidnoten, pepernoten, chocolate letters (the first letter of the child’s name), speculaas, chocolate coins, marzipan figures and fruit and a figurine of ‘Sinterklaas’ made of chocolate.

The ‘kruidnoten’ (spiced nuts) are traditionally thrown into the corner of the room by the ‘ Zwarte Pieten’, some say this was to warn of evil spirits.

These little round cookies date back to the Middle Ages due to the arrival of exotic spices such as pepper. Pepper was thought to possess aphrodisiacal powers and was therefore used to bake fertility cookies. These were thrown at newly weds on their wedding day alongside traditional fertility symbols like rice and flowers.
This throwing of fertility symbols had also been part of an old pagan sowing feast that was celebrated at the beginning of December. The throwing resembled the farmer that sows his fields and it was meant to invoke good spirits.
Under the influence of the Catholic Church the sowing feast had slowly been replaced in the 16th century by the ‘Saint Nicholas feast’. But traces of the pagan tradition survived by throwing the then fashionable ‘pepernoten'(similar to kruidnoten) around.
So this is my recipe for the little ‘kruidnoten’, if you need to warn of evil spirits or invoke good ones, you better get started. 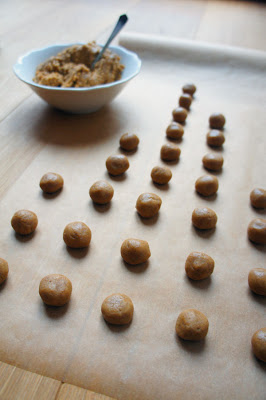 Line a tray with greaseproof paper and preheat your oven to 160° C
Mix all the ingredients together and knead briefly to combine well.
Shape little balls, the size of a nutmeg and place on the prepped tray, leaving space for them to expand.
Bake them in the middle of the oven for 30 minutes.
Optional: after they are baked, you can dip these little biscuits into chocolate. I feel dark chocolate works best with the taste of the spices.
Store in an airtight container to keep the biscuits crunchy.

Don’t forget to put your shoe by the fireplace tonight…