Notice: Function add_theme_support( 'html5' ) was called incorrectly. You need to pass an array of types. Please see Debugging in WordPress for more information. (This message was added in version 3.6.1.) in /customers/6/8/f/missfoodwise.com/httpd.www/wp-includes/functions.php on line 5833 About - Miss Foodwise

You are here: Home / About 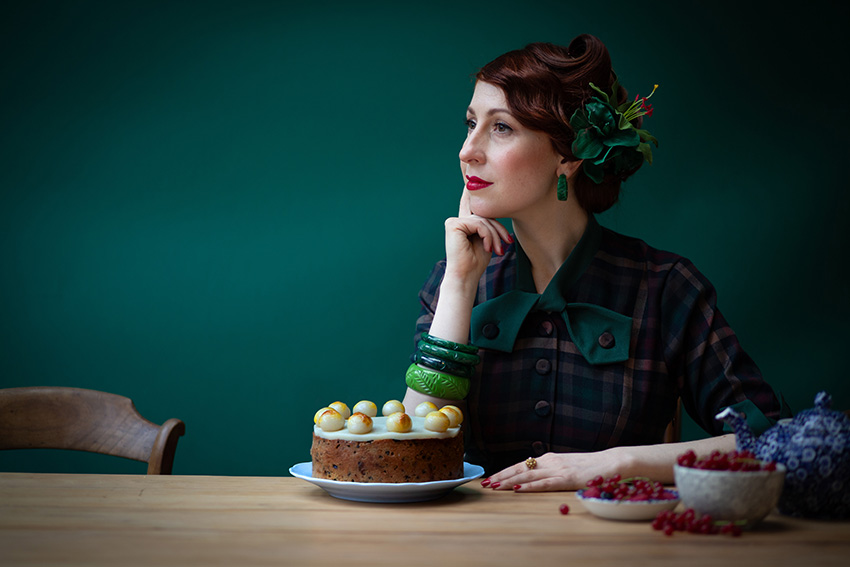 Regula Ysewijn is an internationally acclaimed food writer and author of books about food culture like the history of British puddings and the traditions of Belgian beer cafés. She is asked to come on BBC TV and radio regularly to talk about the various topics she writes about with a strong emphasis on British food and history. She consults for companies like the National Trust and most recently the TV series Downton Abbey and is also one of the two judges of the Belgian version of The Great British Bake Off in addition to being a judge for The Guild of Fine Food’s Great Taste Awards and World Cheese Awards for nearly 10 years. In 2022 Regula was one of the five judges of the Queen of England’s Platinum Pudding Competition, along with Mary Berry and the royal chef Mark Flanagan.

Regula was born in Flanders, the Dutch speaking part of the trilingual Belgium in 1983. As a child she taught herself English at 8 years of age by reading Jane Austen and watching historical documentaries and costume dramas on the BBC. In her native language she has dyslexia. Regula writes in English, but translates her own books to Dutch.

Regula lives in Antwerp with her husband Bruno Vergauwen who is a designer and illustrator who also creates the artwork for Regula’s books and projects. Regula is always found with her nose in historical cookery books and social studies and spends all her hard earned cash on antique cookbooks and kitchenalia like pudding and cake moulds but also has a weakness for vintage fashion.

Regula graduated art school as a graphic designer and specialised in ancient printing techniques like the art of lithography and wood cutting. Wanting to pursue the applied arts she then studied two specialist years in fashion design for which she designed and created a collection inspired by the complexity of the human mind based on historical clothing.

She briefly worked in fashion but disappointment in the industry she turned back to her roots in Graphic design. She worked as a senior graphic designer for large advertising agencies in Antwerp for 7 years during which she started writing and photographing for her blog (2010) as a creative outlet and a reaction against the commercial designs of her day job.

In the winter of 2013 she was offered her first book deal which resulted in becoming a freelance writer and turned into an extensive historical research and finally in 2016 the book Pride and Pudding The history of British Puddings Savoury and Sweet which was shortlisted for the prestigious Andre Simon Memorial Award, Fortnum & Mason Award and it was also a winner in the Gourmand World Book Awards for ‘Culinary Heritage’. In december 2019 “Pride and Pudding” was named one of ‘The Best British Cookbooks of the 2000s’ by the Great British Food Awards. The book was re-issued in 2022 to celebrate 6 years since its release.

In 2016 Regula graduated from Culinary school which she had been attending in the evenings for 6 years, she also has a beer sommelier degree.

Her next book was ‘Belgian Café Culture – A Portrait of the iconic café’ (Luster) – it won the Gourmand world book award in the ‘Culinary History’ category in 2018. It is an ode to a fading culture and her Belgian roots. It was published in a bilingual edition English & Dutch – Regula wrote both languages herself. The book was updated and reissued in 2021 with a new cover.

In 2017 Regula took a break from writing books to focus on the first season of the Flemish version of The Great British Bake Off (Bake Off Vlaanderen) for which she is one of the two judges. The show is currently going into its 7th season.

In 2018 the National Trust asked Regula to write the National Trust Book of Puddings. The book features the pudding recipes that she had wished she could have included in the already extensive Pride and Pudding she published in 2016 so this gave her the chance to finish her work in British puddings.

Her next book was published in Dutch in may 2019 and was called Brits Bakboek, a book with British baking recipes for a Flemish and Dutch audience. It was shortlisted for a Golden Cookbook Award in the Netherlands. An extended and edited English edition was written by Regula and titled:  Oats in the North, Wheat from the South (Murdoch Books). The book shows how the diverse climate of the British Isles influenced the growth of cereal crops and the development of a rich regional baking identity with it. Imports of spices, sugar, treacle, fortified wines and citrus added flavour, colour and warmth to a baking culture much adored and replicated all over the world.  It was published in the spring of 2020 and named one of ‘The food books of 2020″ by the BBC Radio 4 The Food Programme, The New Yorker and The Washington Post. The book was also nominated for the prestigious André Simon Awards in Britain.

Winter 2020 saw the publication of The Official Downton Abbey Christmas Cookbook – a book with historical Christmas recipes and stories of Christmas past tied to Downton Abbey. While the first Downton Abbey Cookbook gives recipes for upstairs and downstairs, this book focuses on the opulent upstairs recipes with plenty of dishes that can be prepared all year long like tamarind curry, prawn curry, salmon puff pastry parcels, anchovy eclairs, mutton chops and plenty of cakes and Christmas drinks.

Currently, Regula is working on her 8th book due out in 2023 with Murdoch Books.

Appearances
Regula’s work has been featured by and she has made guest appearances on Belgian and Dutch TV and on British TV and radio for BBC One ‘Inside the Factory’,  BBC Breakfast, BBC Radio 4’s Woman’s Hour and BBC Radio 4 ‘The Food Programme’, the Guardian, the Telegraph, the Independent, former Jamie magazine, delicious magazine, BBC History, and more. She is also a judge for The Guild of Fine Food (Great Taste Awards and World Cheese Awards) and a member of The Guild of Food Writers. For television in Belgium she is one of the two judges on the Flemish version of  The Great British Bake Off (Baking show).

For Oats in the North, Wheat from the South (‘The British Baking Book’ in the US, Brits Bakboek in NL):
• Gourmand World Book Awards – Food Heritage – winner for Britain
• Gouden Kookboek (The Netherlands) – Nominee
• André Simon Memorial Food & Drink Awards (UK) – Nominee
• Best books of 2020 by the BBC Radio 4 The Food Program, The New Yorker and The Washington Post

For press and event enquiries:
info@regulaysewijn.com

Praise for her ‘Oats in the North, Wheat from the South’

“It’s a love letter to British baking and all that that implies. It brings together buns and bakes that you’ll find in every local shop, and cakes and breads that have long since disappeared. Here you’ll find recipes both old and new, resurrected for the future, together with the stories that make them such a window onto both the past and the present. The joy of Regula’s writing is that through it all, we realise that it takes an outsider looking in to show us who we truly are.This is a beautiful book. It is a lyrical book. It is a book full of good things, modern and old, with a multitude of real heritage and imagined tradition behind them. Enjoy.
— DR ANNIE GRAY, FOOD HISTORIAN

‘Regula – who is Belgian – has an obsession with Britain, not just its food but its literature, landscape and architecture, and we’re lucky to have such an enthusiast looking in from the outside. As well as recipes, she writes about the connections between bakes and ingredients – it’s often difficult to unravel the threads that link foods – and tells stories. A book to read as well as to cook from and an absolute gift for the curious baker.’
— DIANA HENRY

This stunning ode to British baking went semi-viral earlier this year, when the Tokyo-based writer Kat Bee tweeted a page from the book in which the author, Ysewijn, acknowledges the inextricable role of slavery, particularly in the Caribbean, in the development of British sweets: “Sugar has a cost, and that cost was paid by those in bondage.” This clear-eyed perspective on the line between the past and the present runs throughout the book, which threads together Cornish pasties, treacle tarts, seed cake, and all the other greats of the British baking canon.
–HELEN ROSNER, THE NEW YORKER MAGAZINE