You are here: Home / My Books

Regula Ysewijn is a Belgian author and although her native language is Dutch, she feels most comfortable writing in English:

• Pride and Pudding (English version): the history of British puddings savoury and sweet

• The National Trust book of Puddings

• Oats in the North, Wheat from the South: the history of British baking savoury and sweet

• The Official Downton Abbey Christmas Cookbook: a book with historical recipes and the history of Christmas

Every book I write is about preserving a heritage, because in the present day far too much importance is given to new and exciting things while the past holds a treasure of beauty that is often forgotten.

When in Britain I think about the rich food culture so many Brits don’t know their country has, going centuries back and shaped by religious turmoil, invasions and politics. When in my home country Belgium I walk through the streets and everywhere I look I see lost cafés… There used to be a café – or what the English know as a ‘pub’ – on every street corner. Today, they fade, making way for trendy spots which can never capture the essence of a tight knit community. Landlords and ladies who become like mothers and fathers to those who frequent their café. The pictures on the walls telling stories of generations.

Pride and Pudding – Buy Here –
The history of British Puddings Savoury and Sweet. 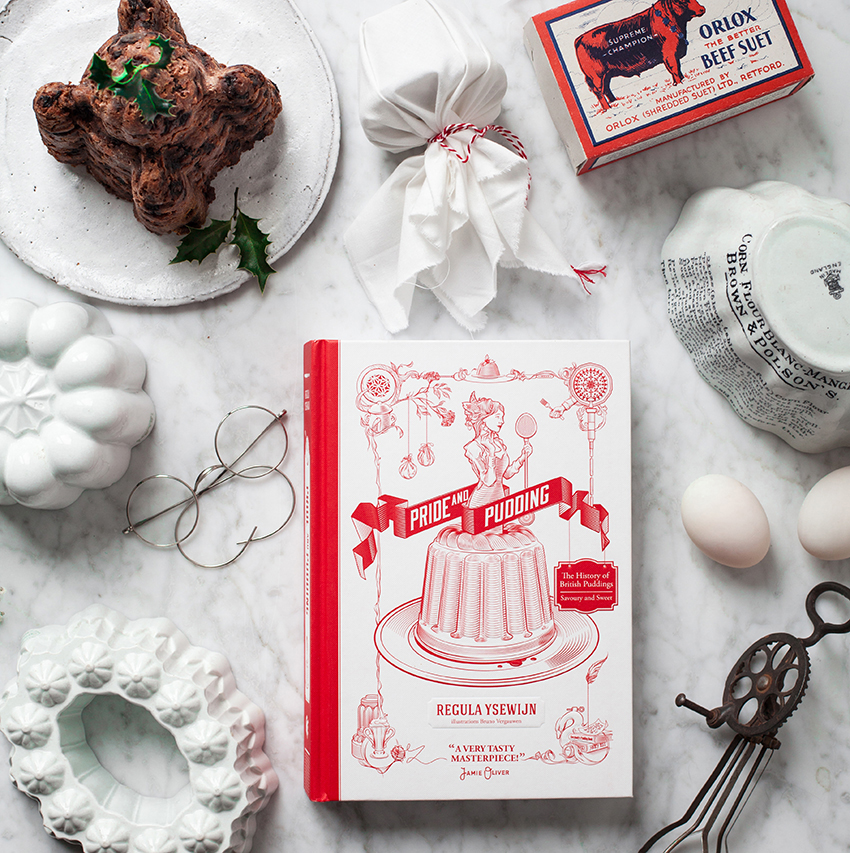 This is a part recipe book and part food history book, illustrated with beautiful artwork by my husband Bruno Vergauwen, with photographs by me. Many of these historical dishes have never been photographed for a book so it is definitely an exciting work to look at and read. Published in English by Murdoch books in UK, NZ and AUS, and in The Netherlands and Belgium by Davidsfonds/WPG.
Read more about the book and some reviews here ->

Pride and Pudding was shortlisted for the prestigious Andre Simon Awards and was a winner for the UK in the Food Heritage category of the Gourmand World Cookbook Awards.

What my publisher Murdoch Books has to say about this book:

In Pride & Pudding, food photographer and writer Regula Ysewijn takes you on a journey through the fascinating culinary history of Great Britain. Hailed as ‘a truly wonderful thing of beauty…a very tasty masterpiece’ by Jamie Oliver, Regula’s Pride and Pudding contains over 80 recipes that give the reader an insight into the life and times of the Great British Pudding in its various sweet and savoury forms. Divided into chapters of Boiled and Steamed Puddings, Baked Puddings, Batter Puddings, Bread Puddings and Milk puddings, jellies and ice creams, Regula’s refreshingly original book traces the history of the British pudding in all its guises as she delves through historical texts dating from the 14th century. With a distinctly gothic-romance aesthetic, Regula recreates the well-known puddings such as Haggis, Black pudding, Bakewell pudding and Queen of puddings, to the lesser known (yet once popular) puddings such as Snake fritters, Cabinet pudding and Mock plum pudding ice for the 21st century kitchen. With stunning photography and fascinating facts along the way (did you know the Jam Roly-Poly was nicknamed ‘Dead Man’s Arm’ due to the custom of it being boiled in an old shirt sleeve?), Pride and Pudding is a refreshingly different kind of cookbook that’s a must for anybody who delights in British history and British food.

Published by Murdoch Books in English (original) and Davidsfonds/WPG in Dutch (translation).

There is a limited edition which comes with a hand made pudding bowl, a card set and signed print and book! More on that here ->

You can order a  book from the usual places Amazon or Waterstones, or support your local book store. 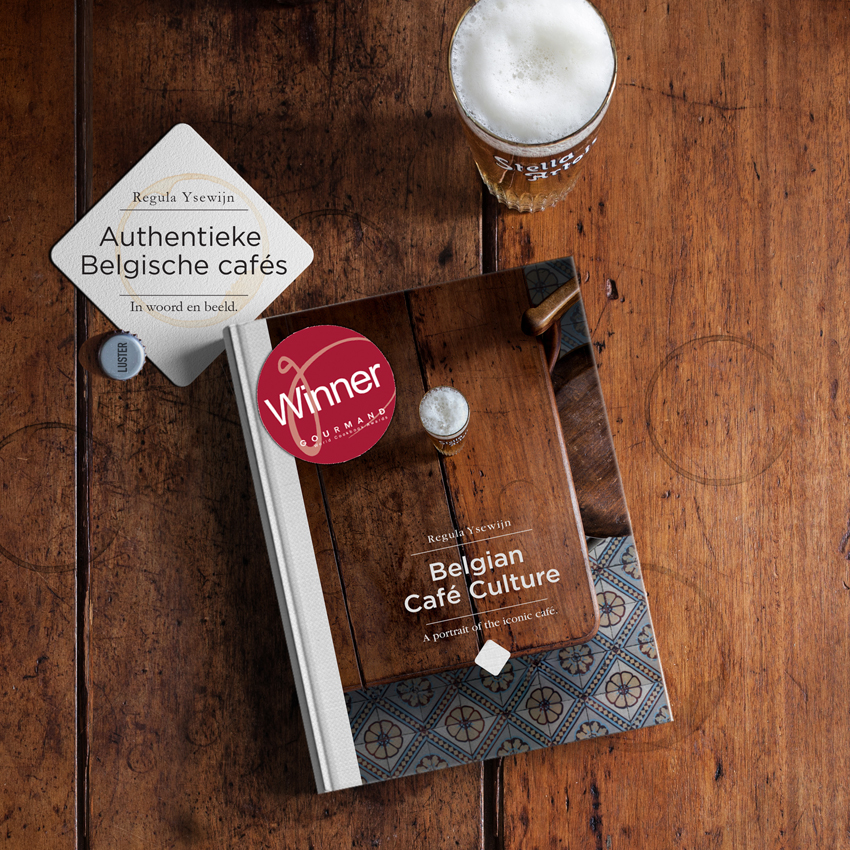 Belgian Cafe Culture tells the story of the ancient Belgian café’s. Traditionally Belgian Café’s would be managed by women, because the pubs were often in their homes and the men would go out to work at the factory or on the field while their wives would serve beer to the community. Very few of these traditional Café’s still remain and I have tried to visit them all, capturing them with my camera before they are lost forever, some have recently closed and I was probably the last to note down their history. In the book I will show you the traditional Café world and architecture, and tell you the stories that built the Café into more than just bricks and mortar. Luster Books October 2016 – published bilingual in English and Dutch. (two covers).

This book is an ode to Belgium’s traditional cafés, to their landlords and -ladies, and to the regular customers who have become part of the interior. It is also a plea to handle the café patrimony of Belgium with the greatest care. Because we have been taking these little cafés for granted for far too long and now, their existence has become fragile, despite the fact that they are an important part of our social and cultural heritage.

Food writer, photographer and graphic designer Regula Ysewijn writes the blog Miss Foodwise. She is also the author of ‘Pride and Pudding’, a book about the history of British puddings savoury and sweet. She’s a true Anglophile, and she often works for clients in London, but she lives in Belgium and cherishes her Belgian roots, in particular the iconic beer and café culture.

For this book Regula visited 45 traditional cafés in Belgium. From the oldest café in the country (it opened in 1515) to the oldest Belgian café landlady, Juliette, who is 96. She visited cafés with beautiful Art Deco interiors, and cafés with the charm and warmth of a living room. In each of these establishments she talked to the landlords and -ladies and to the people who have become part of the soul of these cafés, and she managed to capture all of this in beautiful, touching photographs.

To buy a book you can buy from the publisher directly here (I get an extra percentage of these sales!) or go to your local bookstore (in Belgium) or order online at the usual places (Amazon, or Waterstones to name two)

Signed copies can be ordered by emailing me (see contact page). There is also a limited edition pack of Pride and Pudding which comes with a hand made pudding basin, signed art print and postcard set. This edition is limited to 25. See more info here >

The limited edition of Belgian Café Culture comes with a signed photograph printed on gyclee art paper. This edition is limited to 50.

The National Trust Book Of Puddings (2019) 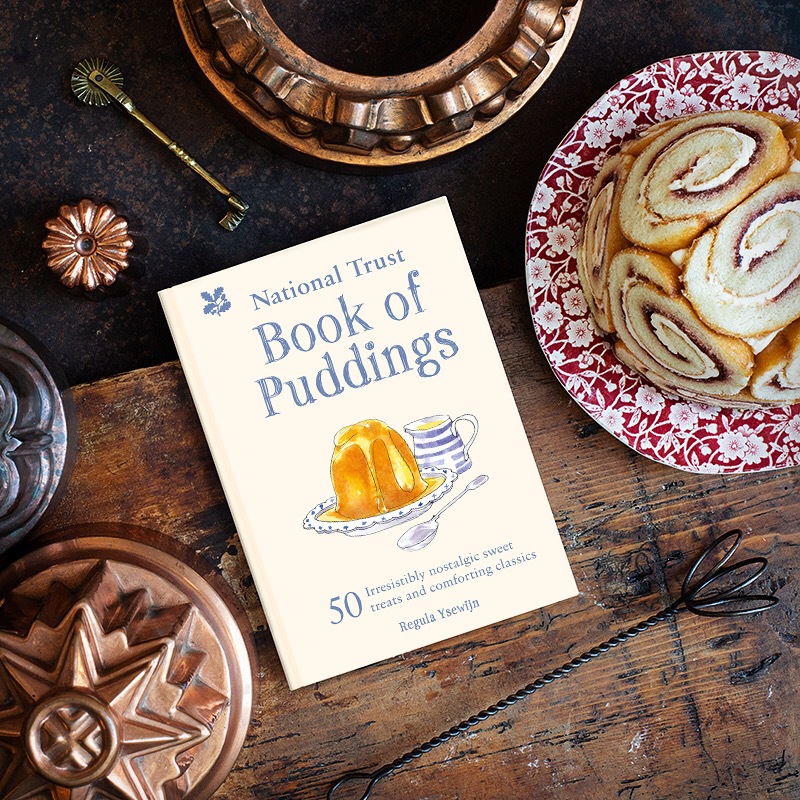 The National Trust book of Puddings was published in april 2019 and gave me the opportunity to finish my story about British puddings. This book gives you the traditional ones, including foreign ones like Zuppa Inglese and Latvian Trifle.

From the publisher: Let pudding queen and food historian Regula Ysewijn introduce you to 50 irresistibly nostalgic sweet and savoury puddings. Britain’s puddings are legendary – everyone has a favourite. Whether it is a Syrup Sponge with custard or a Sherry Trifle piled high with whipped creams, these iconic sweet and savoury recipes, are mouth-wateringly good and the perfect dish for anyone with a sweet (or savoury) tooth!

Including childhood classics such as Jam Roly-Poly and Cornflake Tart to timeless treats such as Rhubarb & Apple Crumble and Summer Pudding, the book is full of recipes for steamed puddings, syllabubs and blancmanges too, and regional specialities with deliciously dotty names Wet Nelly, Bedfordshire Clanger, Apple Dappy and Whim Wham.

Alongside the recipes, Regula has added quirky facts and uncovered some fascinating connections with National Trust properties, including the St George’s Pudding served to Winston Churchill. 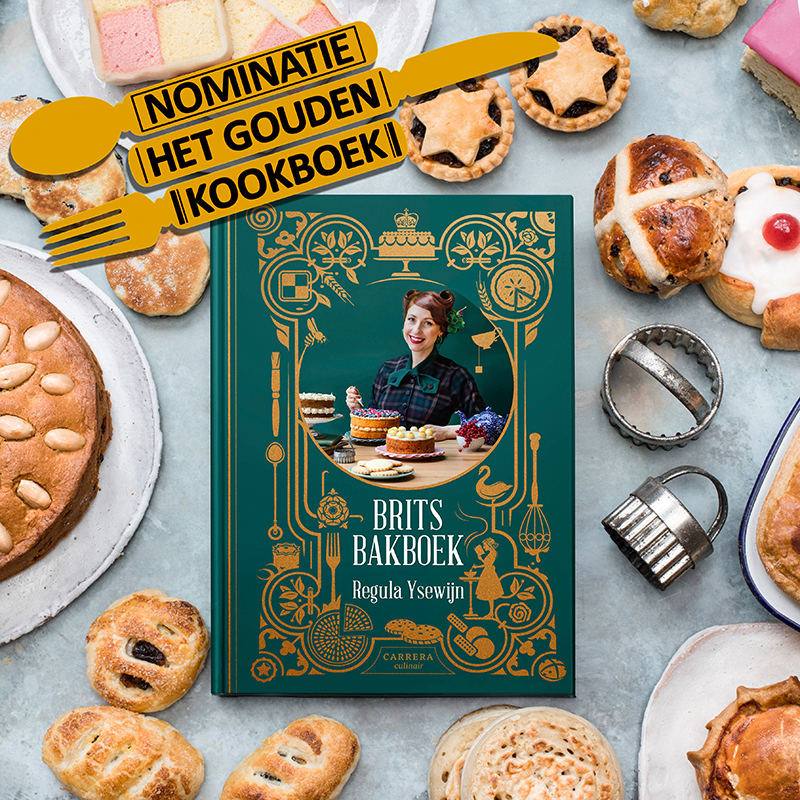 ‘Brits Bakboek’ was published in may 2019 and was written for Belgium and The Netherlands. It is a baking book featuring British baking recipes savoury and sweet and their stories. With this book I was hoping to give an insight in the incredibly diverse baking culture of the British Isles for a non-English audience. The book has been nominated for a prestigious Golden Cookbook Award in The Netherlands, with it I am the first Belgian author to be nominated for this award. 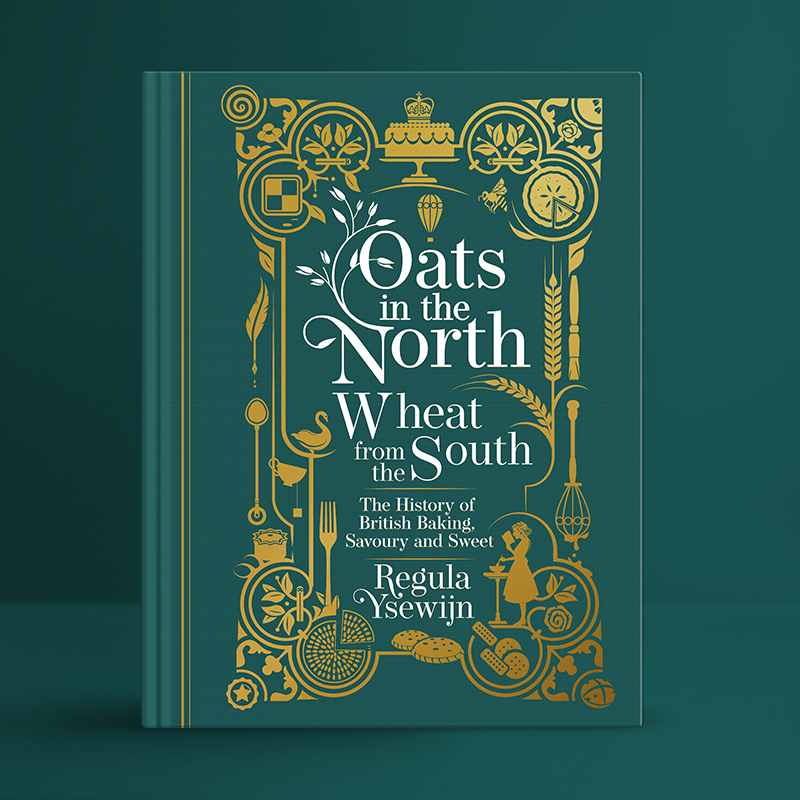 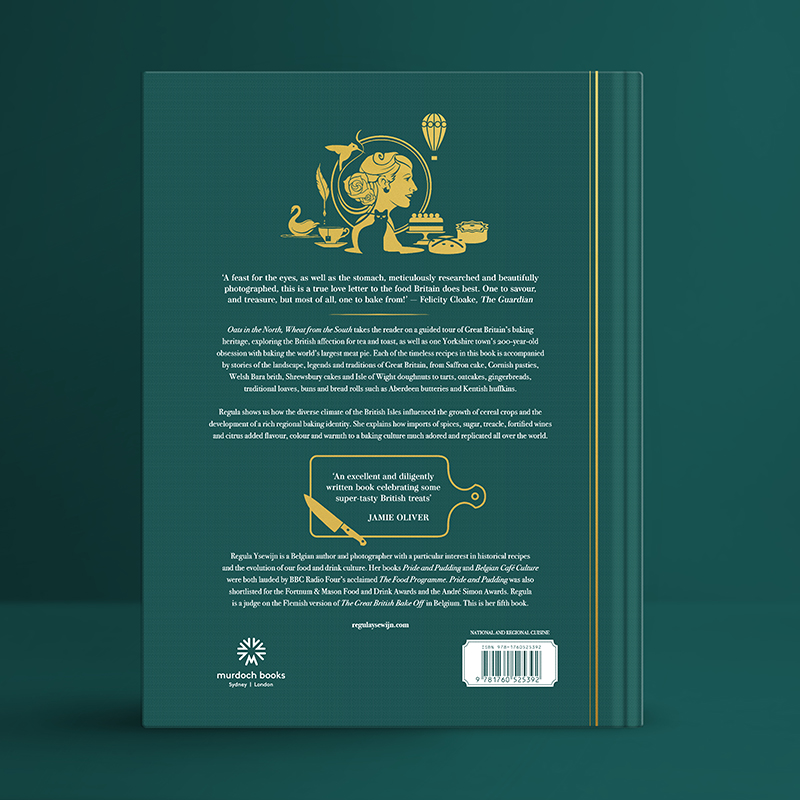 Oats in the North, Wheat from the South is Regula Ysewijn’s evocative, meticulously researched and beautifully photographed love letter to the history, heritage and ingenuity of British baking culture. Regula shows us how the diverse climate of the British Isles influenced the growth of cereal crops and the development of a rich regional baking identity. She explains how imports of spices, sugar, treacle, fortified wines and citrus fruits added flavour, colour and warmth to a baking culture much adored and replicated all over the world. The book takes the reader on a guided tour of British cake lore, exploring the British affection for tea and toast, as well as the one small Yorkshire town’s 200-year-old obsession with baking the world’s largest meat pie. Each of the timeless recipes is accompanied by stories of the landscape, history, traditions and legends of Great Britain, from Saffron cake, Cornish pasties, Bakewell tart, Victoria sandwich cake, Lardy cake, Banbury apple pie, Welsh Bara brith, Clapcake to the many oatcakes, gingerbreads, buns and bread rolls such as Aberdeen buttery rowies, Kentish huffkins and traditional loaves.

‘While this is a book that you just long to bake from instantly, it is also one to be
read, and savoured, as it brings alive the link between culture, climate and cuisine.’ Nigella Lawson

‘A true love letter to the food Britain does best’ Felicity Cloake, The Guardian

‘I love this book… another extraordinary piece of work Regula Ysewijn.’ Jamie Oliver 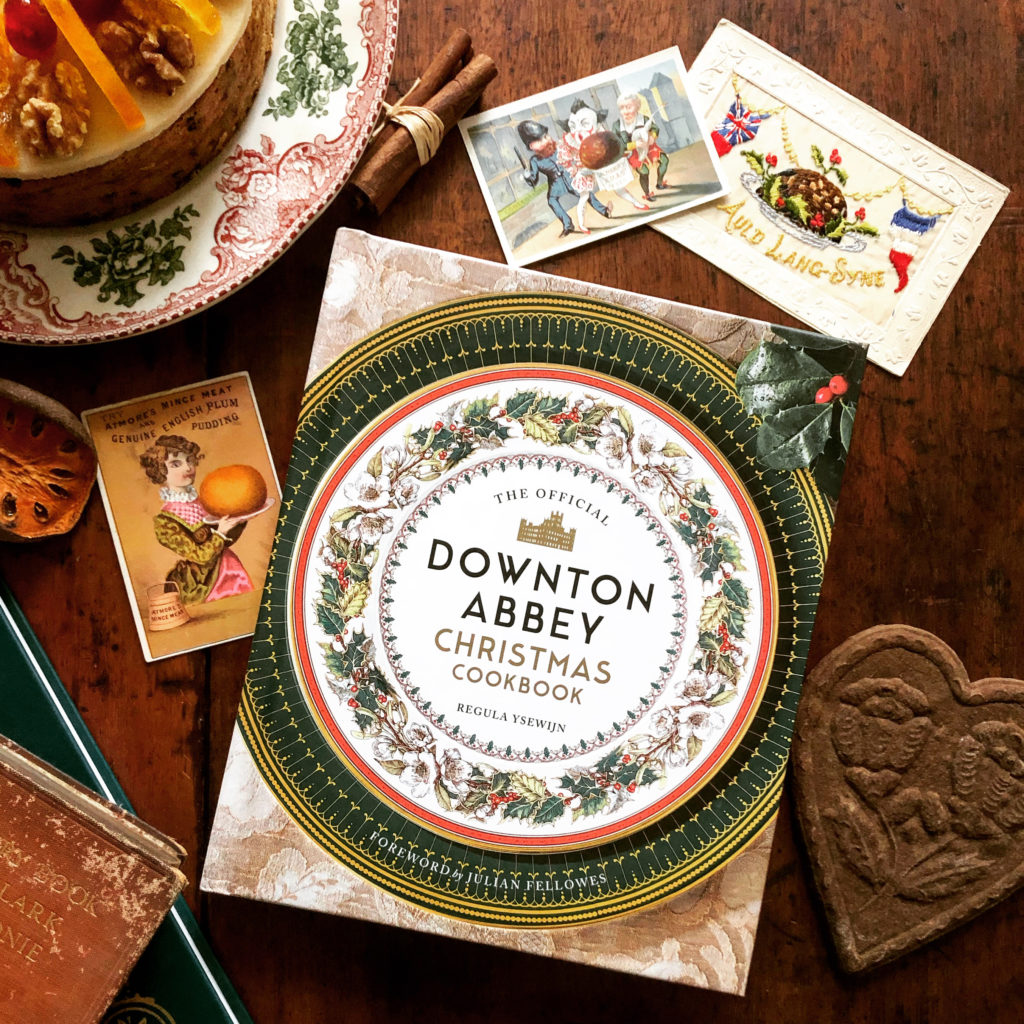