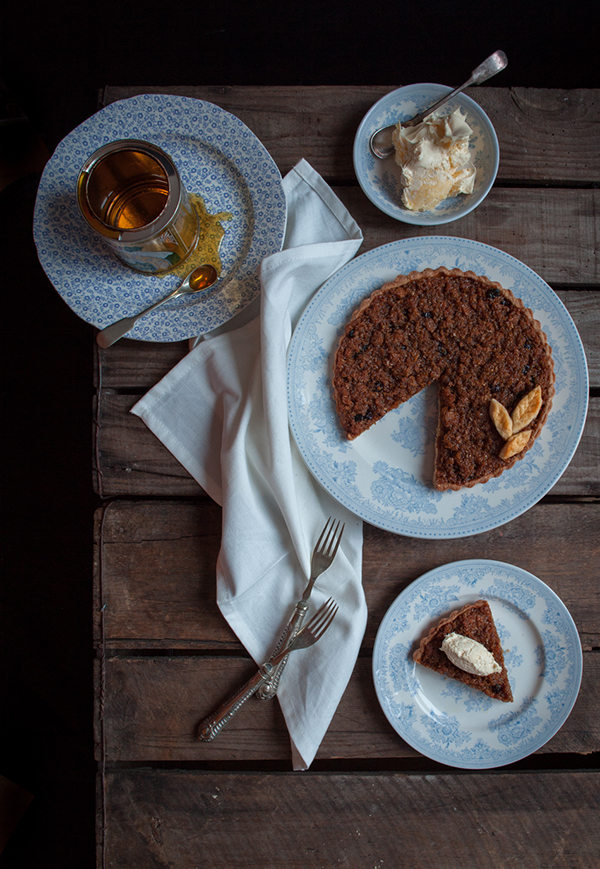 I’ve been wanting to investigate and especially photograph the infamous Treacle mines of England for some time now. But as it happens, it’s England’s best kept secret. So why is it out in the open? Google Treacle Mines and you’ll get numerous stories, one even crazier than the other.

Well… the best way to protect a secret is to convince people that it doesn’t exist. And that is what the clever people from these small mining villages have done.

The ‘Treacle Mine Preservation Pact’ was made and stories were brought to light which would confuse even the smartest on a good day. To protect the whereabouts of the real Treacle mines, a few other locations of mines were invented and after a while only the names of the imaginary Treacle Mines were remembered. The clever scheme mentioned the “The Tovil Treacle Mines” in Maidstone, another two in Kent: Tudeley and Frittenden, a mine around the village of Sabden in Lancashire. But also Somerset and Devon are said to have numerous Treacle mines, as well as the Northern Cumbria.
There is a The Treacle Mine public house in Grays, Essex and a pub named Treacle Mine in Polegate, East Sussex. Local newspapers have reported on Treacle Mine issues and even a Treacle Mine Union was set up to protect the miners interests.
But where are these Treacle Mines?
I found some answers on an evening in a Peak District pub towards closing time. I overheard an older man talking to another old man about a Treacle vein. Forgotten and discarded as pure fiction, I hadn’t thought about Treacle Mines for a long time so when I picked up on the word from their conversation, I couldn’t help but listen in while quietly sipping my local ale. The oldest of the two – and admittedly the most boozed up of the two – was trying to convince the other one of the truth in Treacle mining.
The Treacle source was discovered by a 13 year old boy in the 18th century. The boy, son of a miner, was eager to find lead in a part of a Tor not investigated before. He spent 3 years creating an entrance into the rocks of the Treak Cliff, and another two fruitless years attempting to discover a vein of some sorts. But after those 5 years of hard graft without any penny to his name, he stumbled upon a dark sticky mess he first mistakenly assumed was oil. Not surprisingly he was very excited and left the cave to get more candles so he could take a better look and dig out the well.

When he got home he told his father about the discovery and they both set out to see their money ticket. They lit up the cave with as much candles they were able to afford and started to free the well from its stone tomb. But as the sticky black mess bubbled the boy’s father put in his finger, trying to smell and inspect this thick black matter and concluding it must be something else than oil. Confused and disappointed the boy also dipped his finger in the black bubbling well, smelled it and hit my its sweet but rather unfamiliar scent, he licked the thick black substance from his finger. The boys silence troubled his old father, but after a little while he was able to speak… This sweetness will be sought after and more dangerous than lead, tin or oil.

The next day, the boy, his father and 4 other men of his village set out to mine the Treak Cliff syrup and brought out 6 barrels. They drove up to the city with horse and cart in order to find a buyer for this sweet sticky mess. On the way they sold one barrel so that they could eat and sleep at the coaching Inn as they had far to go and not two pennies to pay for a crust of bread. When after 3 days, they finally arrived at a potential buyer he asked what the name of their product was, the boy replied, “Treacle from Treak Cliff, dear sir, and plenty more where that came from”. The barrels were sold, and an order was placed for 100 barrels by the end of the month.
The buyer of the first barrels of Treacle was a little more clever than the boy and his old father though, and as the boy only could come up with the name Treacle, from the Treak Cliff, he had also given away the location of this precious find. For sweetness was desired and people dealing in it are treacherous, he had opened himself to danger. The buyer knew that little would go a long way and that it could be sold as it is, without further processing and added to bakes and other otherwise sweetened delights.
When the 100 barrels were nearly filled, word came from the buyer that he wanted to visit the mine with his investors. The boy who had kept the mine a secret thus far, was visiting his landlord of which he leased the bit of hill, to pay his debts and was told by the rather snarky man that the debts had been payed and an offer was put in by a man from the big city to buy the whole cave and mine.
Savvy enough to know what was happening, the boy rushed over to the mine and told the news to his family and fellow villagers who were all hands on deck to mine the 100 barrels in time. A decision was made to protect the mine from further development and the well was filled in with rubble and dirt. When the city men arrived, they told them the 80 of the desired 100 barrels had completely drained the well, and a collapse in the cave made it impossible to dig it out further. The fact is that Treacle became so precious and the city folk so greedy, that the mine needed to be protected.
The mine was closed, deemed useless, and sold to the boy who purchased it with the money of the 80 barrels of Treacle. He continued to mine, in order to keep up appearances, but then stumbled upon a blue mineral vein. Treak Cliff cave became famous for Blue John Stone and the Treacle well remained a closely guarded secret. The buyer from the big city managed to create a thick uncrystallized syrup made during the refining of sugar that closely resembled the taste of Treacle. As the name was never protected, he kept it but left out the cave name to prevent embarrassment, as by then, the stories about Treak cliff Treacle were all forgotten. 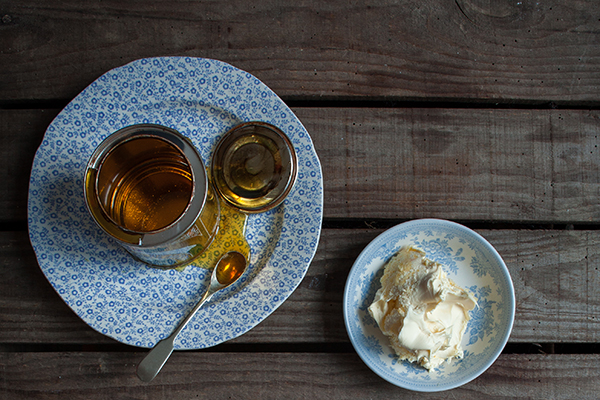 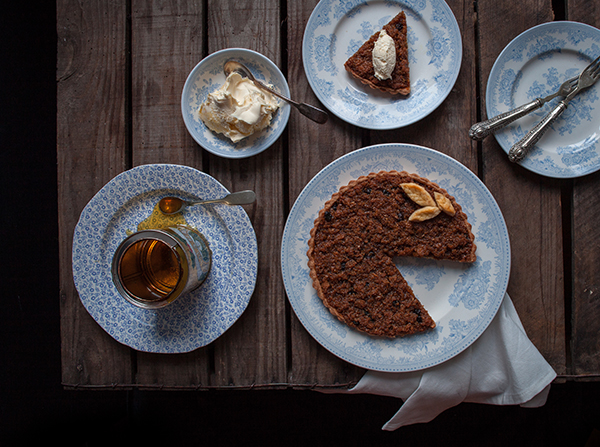 Treacle tart is made, not with Treacle but with Golden Syrup. I have added black Treacle however, for flavour. Old recipes state using Treacle, but Golden Syrup was in the past known as Golden Treacle, or light Treacle. This tart is not for people sensitive to sugar, in fact, I can’t manage to eat a whole piece despite the flavour being nice. It is remembered by many in England as a School dinner pudding and those who loved it then, love it still. So here it is, especially for the sweet tooth!

Brown bread Treacle Tart
Filling
150 gr fresh brow bread crumbs
380 gr ‘golden syrup’
20 gr ‘Treacle syrup’ or Molasse
50 gr unsalted butter
juice of half a lemon
2 tbs currants
1 egg yolk
Pastry
250 gr plain white flour
125 g unsalted butter, cold
60 gr cane sugar, blitzed fine
3 egg yolks
Method
Pastry
Sift your flour onto a working surface or into a large bowl, make a well in the middle and add the egg yolks and sugar.
Take your butter from the fridge and and bash it a couple of times with a rolling pin to make it more pliable. Now cut the butter into small cubes and add to the rest of your pastry mixture.
Take a blunt knife and start cutting the knife through the ingredients to work them together. You can use your fingers at this point but using a knife will keep the butter cold.
When all is combined you will have a coase mixture, now squeeze the ingredients together using just one hand, with your fingertips. When your mixture comes together, spread the pastry on a board or working surface and knead and spread until the board is completely clean and not showing any remnants of pastry anymore.
The pastry should have the soft consistency of butter but shouldn’t be sticky to the touch.
Now pack the pastry in cling film and leave in the fridge for a minimum of 30 minutes or overnight.
Filling
Cut up the bread in small chunks, as small as you can manage.
In a pan, heat up the syrups, butter and lemon juice but do not let it boil!
Now add the bread and stir, turn down the fire and let rest while you prepare your pastry base
When you are ready to use the pastry, preheat your oven to 190°.
Roll out your pastry on a floured working surface as thin as you can manage.
Have a tart pan ready and place your pastry on your rolling pin to ditribute it onto your tart pan.
Let the pastry sink into the tart pan with a little help from your fingers or a ball of extra dough (this damages the pastry less than using fingers). Trim off any excess pastry by rolling over the top of the pan with a rolling pin. Use a ‘pastry docker’ or fork to prick the pastry, without piercing through to the pan.
Make a cartouche of baking paper and place it into the pastry case, then fill with dried beans or rice and bake blind for 15 minutes. After 15 minutes, remove the cartouche and bake for a further 5 minutes. Keep an eye on your pastry and remove when it starts to colour too much.
Now to finish the tart. Stir your filling and add the currants and egg yolk, pour into your tart pastry and even out the surface.
Place in the middle of the oven and bake for 25-30 minutes.
Serve with Clotted Cream and a nice strong cup of tea
Previous Post: « We shall drink Lambswool on the Twelfth Night
Next Post: About my work: Magic Soup – Book Photography »