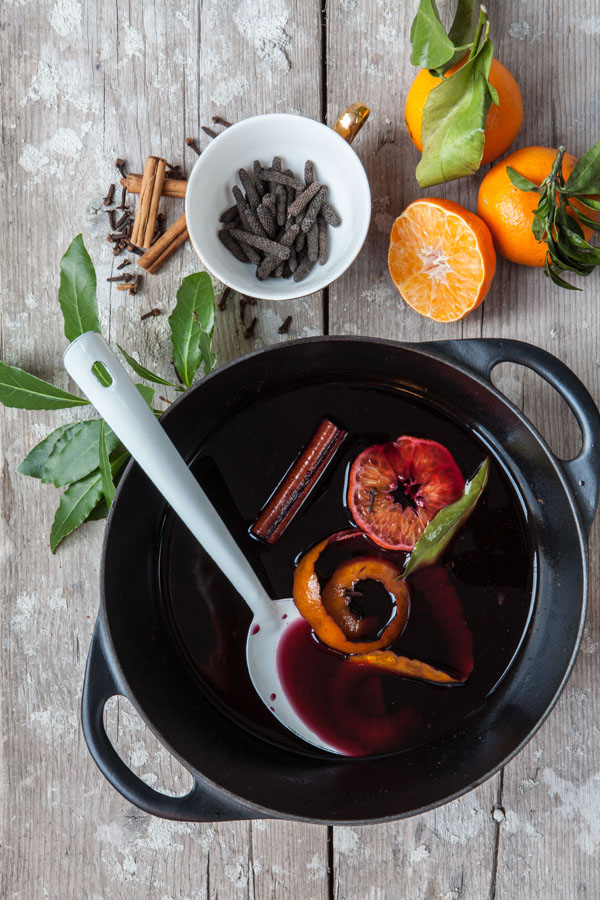 And then it is suddenly christmas again… it seems only yesterday that it was september and now we are only moments away from januari. It will be march in the blink of an eye and when it’s august you will be wondering where those months have gone to.
When you are a child, the days seem to drag on like weeks and the weeks like months but when you are all grown up… you wonder where that hour of free time went to and when you are finally able to start reading that book you’ve got to read in the summer.

To warm your spirits after the last busy weeks of the year 2013, a year that has brought me excitement, friendship and a new venture of which I will tell you all about very soon – I had mulled wine on my mind.
The sweet scent of the warm wine and spices always transport me back to the christmas markets in Aachen. My parents and I would drive to Germany especially for it each year. Even from a young age I would be allowed half a cup of mulled wine to warm my hands and to bring a rosy blush to my ice cold cheeks. It was one of the highlights of my year, to take in the different scents in the air, the aniseed of the artisan candy being made, the greasy smell of Reibekuchen, the aroma of spices blended with chocolate from the Aachener Printen biscuits and the mulled wine and rum.

Sometimes the very unlikely of foods and drink can be the ones that have been around for centuries and some recipes never changed very much.
Mulled wine or ypocras as its name was for centuries, has been around since the Middle Ages but mulled spirits pre-date Medieval times. I found a recipe for a fine spiced wine in a Roman cookery book that looks a lot like the recipe for ypocras. It is commonly thought that the drink is named after the Greek physician Hippocrates, however this is not so. It is more likely that ypocras has this name because the herbs and spices were strained through a conical filter bag known as a Manicum Hippocraticum – sleeve of Hippocrates. The Old French name for Hippocrates was ypocrate which explains the etymology of the Middle English name ypocras, hipocras, ipocras, ippocras, hvpocras, hvppocra, and many more variations. 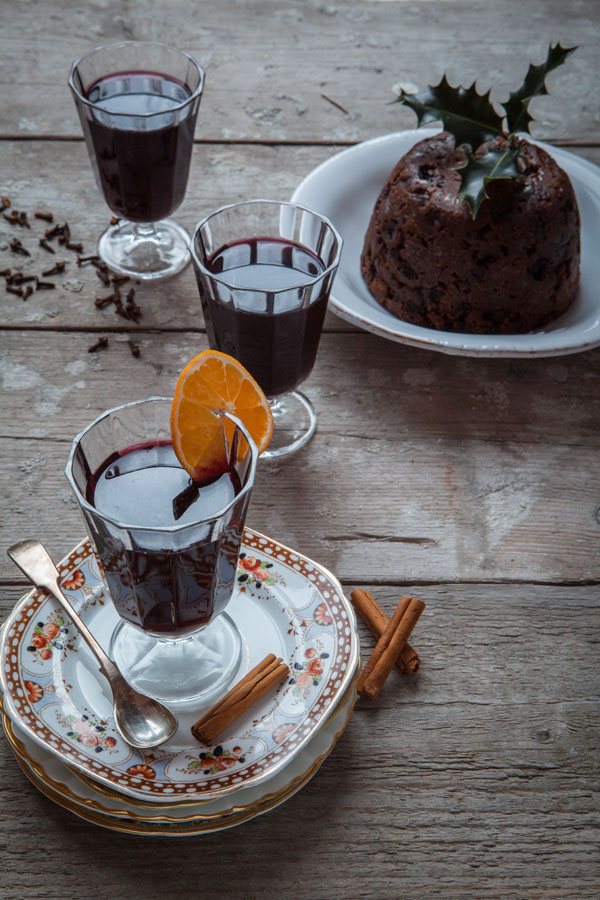 The spice mixture for ypocras was known as ‘Gyle’ and usually contained cinnamon, grains of paradise, long pepper and cardamom pods. These spices were bruised with a pestle and mortar and then left to steep in the red or white wine overnight or possibly even longer to soak up all the flavours.
One can assume that ypocras was used for medicinal purposes rather than for feasting as in recipes it is often mentioned as the perfect tipple after dinner to aid digestion. The oldest recipes therefore include many more herbs which will have given the spiced drink more of a cough syrup flavour than the enjoyable winter warmer we know today.
The first English recipe for Ipocras dates from approximately 1390 and goes as follows:

The recipe is more a list of ingredients and assumes the cook knows the proportions and that a red or white wine is to be used. Sugar was a precious ingredient and only for the lord and master so Ypocras would only contain sugar in the wealthy homes while the common folk sweetened their drink with honey.

Ypocras was common enough to be mentioned in literature as Chaucer wrote In his Merchant’s tale in the 14th century “He drynketh Ypocras, Clarree and Vernage Of spices hoote t’encreessen his corage.”  and John Russell’s The Boke of Nurture even contains a ypocras recipe in verse.

Through history we find a vast amount of recipes for this spiced drink, but not only for the spiced wine. Before hops were being used in beer, there was a mixture of herbs known as the ‘Gruut’ that was used to flavour and preserve the beer. Mankind has always been searching for flavourings to tinkle the taste buts.

After the 16th century recipes become more richer including more sugar, oranges, lemons, almonds and apples. My recipe uses cinnamon, cloves, long pepper, nutmeg and clementine juice with a few tablespoons of home made sloe gin. I used raw cane sugar which worked rather well instead of white loaf sugar.
Sometimes I will add marjoram and cardamom like in the first recipe but because of the marjoram it started to taste rather savoury. It is still very pleasant and not a flavour you’d expect in a mulled wine so it is a definite option to add it if you want something different. The long pepper added enough spice so I didn’t need to use the dreaded ginger but if you are a ginger lover, feel free to add it as you please. I would have loved to add Grains of paradise but I had no way of getting my hands on them. 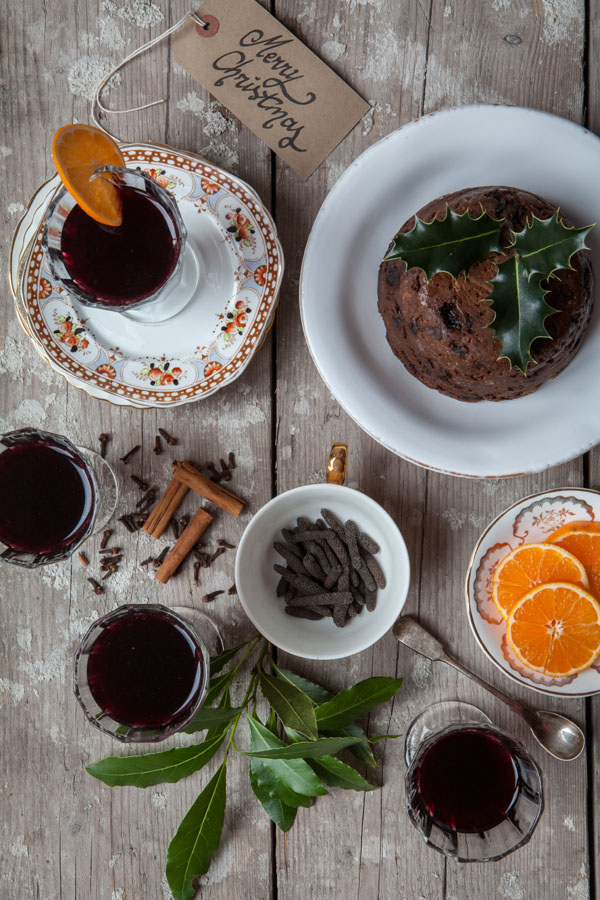 Method
heat up 200 ml of red wine with the sugar and the spices, juice and peel until it dissolves, boil for 10 minutes and then simmer for 5 more. Add the marjoram if you are using it and leave to cool, when nearly cold or cold, add the rest of the wine and the sloe gin and leave to take up those lovely flavours overnight. You can even freeze the wine and spice mixture before adding the rest of the wine.
Strain, bottle and keep in the fridge until needed then gently heat up before use – don’t allow it to boil or you will loose the alcohol and we won’t want that. 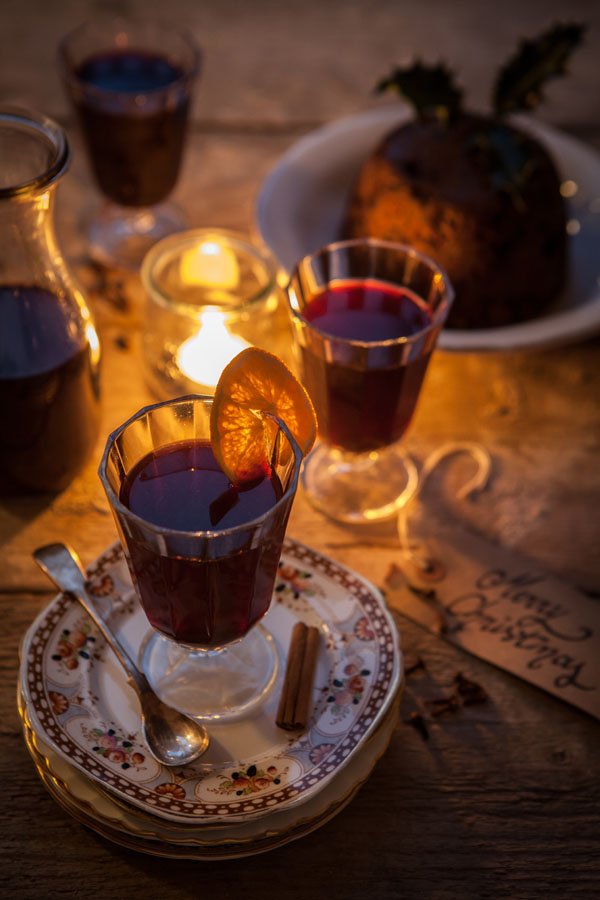