Ikea, making us believe that their new fruit waters are healthier than their sugary fizzy drinks, because they contain 50% less sugar.
Meanwhile across the channel, a chef has had enough and is campaigning for a tax on sugary drinks – all sugary drinks, even the ones with 50% less sugar. 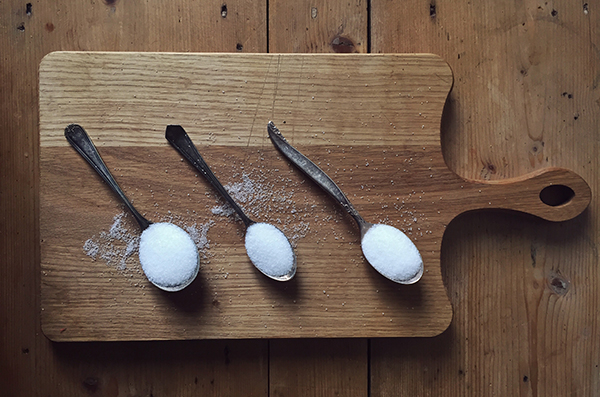 I thought the press might be all over this, I thought it would explode on health blogs and yet… all remained quiet. As I am getting ready to attend a food symposium in the UK with the theme ‘Food and Communication‘ I found it fitting to have a rant about how this communication by IKEA* is misleading us all.

From september 2015 they will ban all sugary fizzy drinks from their restaurants. That’s the headline and that’s the lie. Proudly they are replacing their imitation Pepsi and 7up with more healthy fruit waters which contain only half the sugar. Half the sugar. That’s still too much sugar.

The World health organisation (WHO) say that we ideally should be consuming no more than 6 teaspoons of sugar a day. **Regular fizzy drinks contain up to 6 teaspoons per 330ml serving. That’s your daily sugar intake in one glass of sweet drink. That is bad.

So if IKEA’s fruit water contains ‘only’ half the amount of sugar of your average fizzy drink – it still contains about a whopping **3 teaspoons of sugar.
When having one glass of IKEA fruit water means you have consumed half the daily recommended amount of sugar. And you know what? They offer FREE REFILLS! So you can have more!

The communication to the world is that IKEA is trying to get a more healthy reputation… I think they are misleading the consumer with it.
Firstly their fruit waters aren’t healthy, nor are they more healthy because they contain ‘only’ 50% the amount of a regular pop per serving. Secondly they are motivating people to refill their cup at self service machines, so people can have another 3 teaspoons of sugar diluted in water with natural flavourings.

How do you do this?
Fill a jug or a barrel with water, just water, and just toss in sliced cucumbers, apples, strawberries or whatever fruit. Then and only then you have FRUIT WATER, and not fizzy drink with natural fruit flavours and only half the sugar.

I understand that this would make your system of free refills at a machine impossible, but I think we are outgrowing the machines and are yearning for human contact again. Then and only then will you be making the change you are shouting about right now. Then and only then will you be truthful with your customers. Right now, you are contributing to a world-wide problem of children and adults being overweight due to an extreme sugar intake. All because people buy foods and drinks which are low in sugar, to then consume double.

Jamie Oliver says that he expects the surcharge to raise £80,000 over the next year. He will donate the money to Sustain, a charity that “support’s children’s health food initiatives across Britain.

He told the Sunday Times: ‘I was born into the restaurant industry and I truly believe that by joining together on this issue we not only send a powerful and strong message to government but we also have the potential to make a longlasting legacy that could ripple across the world.
‘I’ve seen first-hand the heartbreaking effects that poor diet and too much sugar is having on our children’s health and futures. Young children are needing multiple teeth pulled out under general anaesthetic and one in three kids [is] now leaving primary school overweight or obese.
‘Soft drinks are the biggest single source of sugar among school-age kids and teenagers and so we have to start here.’ The chef said an explanation of the sugary drink levy will be printed on all his menus and waiting staff will be able to offer alternative healthy drinks for children.’

Quite a different story from, we’re cutting down on sugar but you can still go for a refill so you can have all the sugar you want.

*This post is about IKEA BELGIUM, I have no idea what the situation is in other countries.
** I do not know how many teaspoons of sugar their fizzy drinks contained so used an average quantity. I will of course alter the numbers if they become known to me.

Apologies to my readers for going off-topic on this blog, but I truly believe you can’t be a foodie without being a food activist.