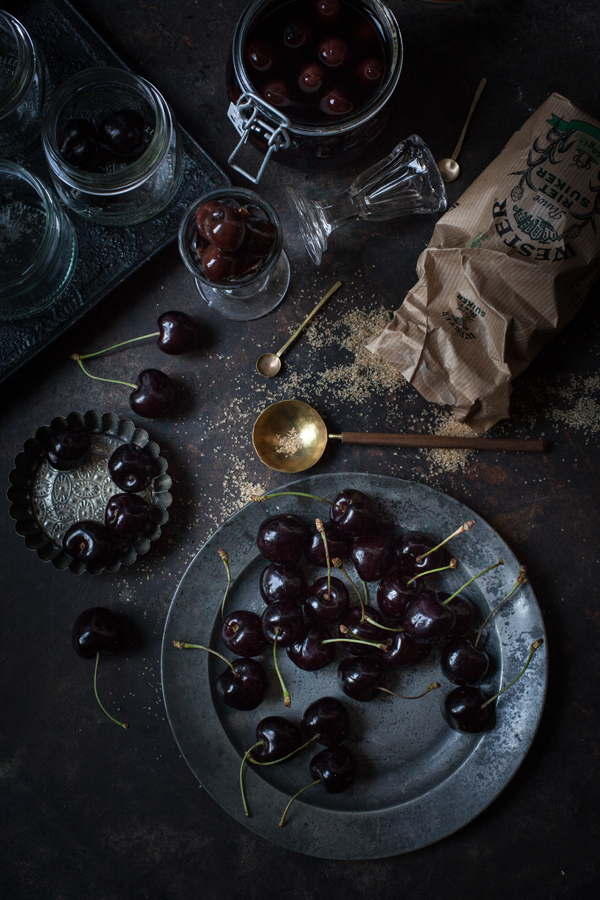 Preparing the cherry brandy or ‘Kriekenborrel’ as we called it in Belgium, is the first step towards Christmas and winter for me. On Christmas eve when I was a child, I was allowed one single drunken cherry in a small dainty glass as a treat. This is how memories are made, and how time and time again when Christmas comes, you need certain flavours to transport you back to the past. Nostalgia and Christmas go hand in hand. It is the one western tradition that is still going strong. People prepare things like this cherry brandy and plum pudding months in advance. The anticipation grows in the jars, and by every spoonful of brandy that is poured over the pudding every week.
Preserving fruit in ‘Jenever’ which is almost identical to Gin, has been a custom in our parts for many decades. It was particularly popular in the 1950’s when my grandmother was young. Because my mother grew up with it, it was sentimental to her, which is why she taught me how to make it. I still have the last jar of cherries my mum and I drowned in Eau de Vie in 1998. It is quite special, because the jar holds memories as well as cherries. In my kitchen I have jars from 2006, 2010, 2011 and 2013. Some I give away, ladling the cherries and booze out into smaller jars to decorate with a ribbon and the date. They go to people I know will appreciate my precious preserve. Because I part with memories of making them and hope they will be cherished….