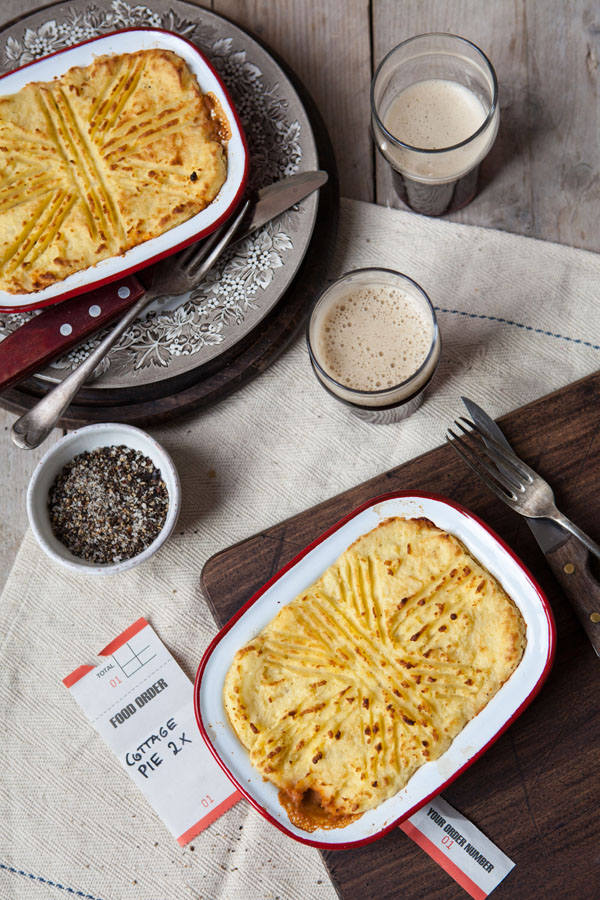 Wishing you all a happy Saint George’s Day with these humble cottage pies. I’ve been mostly working on my book, stuck with my nose in research and absolutely loving it but in the evening I long for great simple food with pure flavours. This pie is just that, with the best spuds you can find for your mash, decent flavoursome beef and a layer of moist spinach, this is a treat for me. I just wrap it in a towel and relax with a beer and a movie.

Today will be marked by celebrations with a lot of beer in most parts of Britain, often started by a good old pub meal that very likely will consist of a hearty pie.
Saint George’s day is the National Day for England although it is not an national holiday in Britain. As you will know, he is the patron saint of England and he is nearly always depicted slaying a dragon.
The origins of George and the dragon are quite obscure, like so many legends are. The earliest written source of Saint George in Britain can be found in the works of Bede, a monk from Northumbria who lived around the end of the 7th century.
It is not a saints day unique to Britain however, the feast of Saint George is celebrated throughout Christian and Protestant countries and all around the 23th of april, the date on which he would have been martyred.
Of George nothing is certainly known, it is most widely accepted that he was a Roman soldier from Palestine who lived in the late 3rd century AD.
Born as Georgios, Greek for ‘worker of the land’ he became an imperial guard to the emperor Diocletian, but when Diocletian issued a decree that every Christian soldier should be arrested, George renounced his emperors ruling. He declared himself openly to be Christian and refused to convert to the old Roman gods. Diocletian tortured and later decapitated George for his refusal. 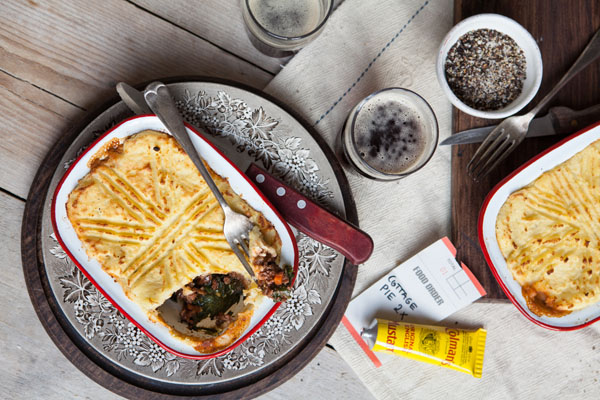 No doubt you will all have been waiting for the dragon slaying moment in this story but unfortunately I will have to disappoint you as there are no dragons in this tale.

The tale of Saint George and the dragon dates from a much later legend during Medieval times. Here the story of George would have been Eastern in origin and brought back from the Crusades. Before the Middle ages George was depicted as a soldier but around the 11th century that changed to the now more popular dragon scene. The first written source is believed to be a 11th century Georgian text that can be found quoted in the book The Warrior Saints in Byzantine Art and Tradition.

Then the tale of George and the dragon appears in the Legenda sanctorum or Golden legend, a collection of hagiographies (stories of the Saints) by Jacobus de Voragine. This book of which there were over a thousand of manuscripts in the 13th century was very popular and was one of the first books that were printed in the English language when printing was invented around 1450.
Jacobus de Voragine tells the tale of the place Silene in Lybya where a dragon lived that terrorised the countryside. To appease the dragon, the people would bring it sacrifices in the form of sheep and also children who were chosen by lottery. One day the daughter of the king was chosen in the lottery and he offered all his wealth to save her. The people refused and the maiden was sent to the dragon dressed in a wedding gown. Then a man named George passed the lake where the dragon lived and saw the princess in distress. He charged towards the dragon with his lance and wounded the beast, he then bound him and took him to the village with the princess he had saved from it. The villagers all in fear of the approach of the dragon were then given the choice. Become a Christian and George promised to slay the dragon there before them. They all converted and George slew the dragon.
There are other similar versions of this tale, as there are with so many legends and from the 15th century on we find a large amount of illustrations, paintings and stained glass windows illustrating Saint George slaying the dragon to save the maiden throughout the world.
Legends are usually there to tell the oldest tale in the book, good and evil, right and wrong.
What really happened and if it happened at all is not important anymore, it is what you do with it and how you interpret it.
My days of being religious have long been gone, but I still like to hear the stories, and I like to try and trace their origins.
What better way to celebrate than having a meal together, these cottage pies are easy and can be made well in advance and popped in the freezer until you need them.
Cottage pie has a long history, it has always been about using up leftover meat to create a new and filling meal.
So what are you up to today? 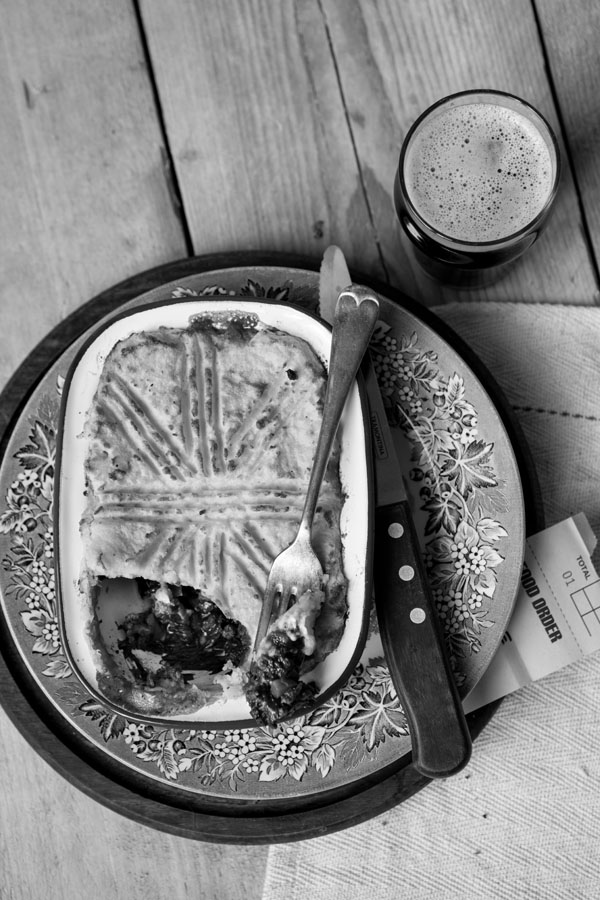 Cook your spuds and make your mash with milk, butter, nutmeg and salt. If you like to make it richer, add an egg yolk too. You need a silky smooth mash which is slightly wetter than you’d eat it normally as it dries a bit in the oven.

Chop all the vegetables and add to a heavy based casserole, glaze a little over a medium flame and then add the meat. Brown the meat and add the tomato puree, stir well to combine evenly
When the tomato starts to caramelise – which means stick to the bottom of the pan, pour in the wine or beer. Stir to loosen up the meat and veg.
Let the booze evaporate, it takes about a minute, and it will be reduced a lot. If you don’t want to use alcohol, use water or stock

Now pour in the garlic, stock, and the Worcester sauce and put on the lid, leave for 30 minutes but check on it frequently so it doesn’t burn to the base. You may leave it longer too, it is merely for the flavours to develop.

Use boiling water from the kettle and blanch your spinach, drain and add a cube of butter, you may omit this but butter does taste so very well.

Place your spinach in your chosen baking tray or trays, season with pepper.
When the meat is ready, transfer it to you tray or trays.

Now make the mash layer by scooping blobs of potato on the meat, then spread out.
You can pipe this mash, but who has the time to pipe mash on a weekday??

Place into the oven under the gril for about 10-15 minutes or until your mash has some color. It depends really on what you like, lightly coloured or not.

Serve with a beer, or wine if you like.
Put the rest in the freezer, we usually have some leftovers. These pies freeze very well, just defrost in your fridge overnight when planning to use.