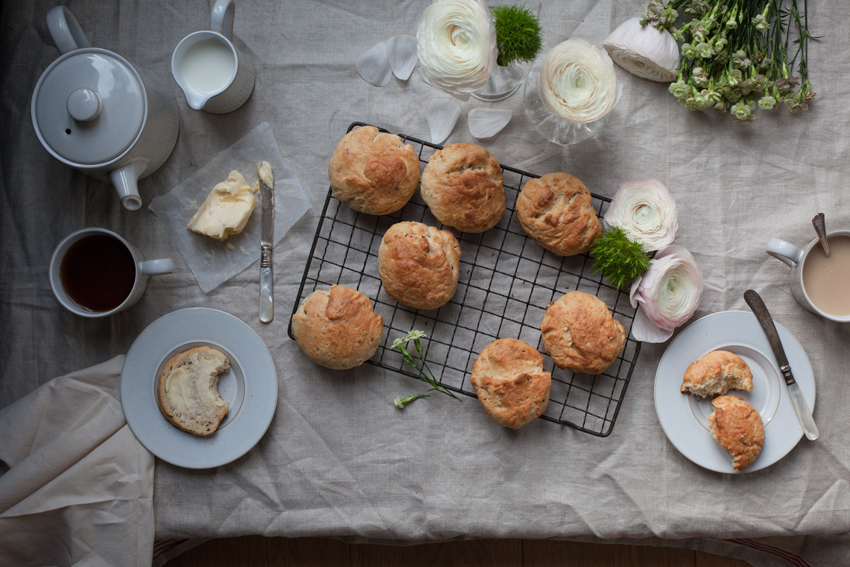 If you have visited the city of Bath, nestled in a green valley with its Roman baths, elegant Georgian townhouses and impressive circus, you might have noticed that there are two famous buns in town. Both are competing to be the oldest, most authentic, and most valuable to the city’s heritage. The Sally Lunn and the Bath Bun – they both even have their own tea room in town. Of course the notion that one of these buns is more important than the other is bollocks. At the end of the day, it’s just something to spread your butter on. I’m far more interested in both of these buns history than I am in their importance.

One bun maker claimed that the Bath bun was just simply a Sally Lunn which was slightly changed and then given the name Bath Bun for the tourists. A rather simplistic way of looking at it, but it has happened to other foods in the past. Of course in this case we are talking about two entirely different buns.

What a difference a bun makes
We know that during the Great Exhibition of 1851 in London, set up by Prince Albert,  934.691 Bath buns were sold to the public. This shows they were either popular, or they were the best option! According to bun legend people remarked that the Bath bun sold in London was not exactly like the one sold in Bath and soon Bath buns in London were renamed London buns. However, mentions for London buns can be found 20 years before the Great Exhibition. So I’m fairly sure we are again talking about two different buns. To confuse things even more is that in Australia a Chelsea bun is known as a London bun.

The Sally Lunn which I will get to in another posting, is a light bun with a nice dome shaped top, it looks like a brioche but is less rich and not sweet at all. It is known since 1776. The Bath bun used to be a Bath cake in the 18th century. But although it was called cake, it was definitely treated as a bun, which according to Elizabeth Raffald The Experienced English Housekeeper, 1769 should be the size of a French roll and sent in hot for breakfast. Bath resident and cookery author Martha Bradley, gave a recipe in her book in 1756 entitled ‘Bath seed Cake’. Over the course of the 18th century eggs were added to the batter making the buns richer. In Andre Simon’s ‘Cereals: A Concise Encyclopedia of Gastronomy’ from 1807 the recipe instructs the cook to:
Rub 1 lb. of butter into 2 lb. of fine flour; mix in it 1 lb. of caraway comfits, beat well 12 eggs, leaving out six whites, with 6 spoonfuls of new yeast, and the same quantity of cream made warm; mix all together, and set it by the fire to rise; when made up, strew comfits over them.

Jane Austen was a fan of Bath buns and promised to stuff her face with them if her sister Cassandra would not be joining her for a visit to Paragon that May.

Your going I consider as indispensably necessary, and I shall not like being left behind; there is no place here or hereabouts that I shall want to be staying at, and though, to be sure, the keep of two will be more than of one, I will endeavour to make the difference less by disordering my stomach with Bath buns; and as to the troyle of accommodating us, whether there are one or two, it is much the same
Jane Austen to Cassandra, 1801

Her diary entry for 1801 shows us that by then, the Bath cakes were known as Bath buns. This was most definitely a bun for the rich, in the 18th century the normal folk would not be feasting on buns for breakfast, they would have to do with a plain loaf of bread. The eating of yeast leavened buns for breakfast only became something more widespread in Victorian times, when bakeries and methods became more industrialised.

The Bath bun of Jane’s and Elizabeth’s time would have been quite similar, and they are quite filling, unlike the Bath buns we find in Bath today which are more like brioche and do look more like a Sally Lunn but with toppings added. The old Bath buns or cakes contained caraway comfits and were also decorated with them. Caraway comfits had been popular in Britain since Tudor times, and were made by coating the seeds with a various layers of sugar syrup, drying the seeds in between each layer. It was and still is if you want to try to make them today, a very time consuming task. The Caraway comfits, along with other comfits, were often served at the end of a meal with a mulled wine to aid digestion.  The buns were usually also coloured yellow using ‘chrome yellow’ which you could only obtain from an apothecary. That led to an unfortunate event when in 1859 a baker poisoned his customers because the apothecary had sold him arsenic by mistake.

Towards the end of the 19th century candied peel, citrus zest and/or dried fruit, and mixed spices became popular. Todays Bath Buns are no longer made with caraway seeds or comfits, nor are they decorated with them. They are now baked with a lump of sugar in them, and decorated with sugar nibs and currants. It now looks more like a brioche like the Saly Lunn, light instead of a more dense scone-like bake. Elizabeth David said of these buns: This London Bath bun should, I believe, be distinguished from the Bath bun of Bath and the West Country, said to be still at least shapely and neatly rounded if not precisely light. Elizabeth David uses Elizabeth Raffald’s 1769 Bath bun recipe for her book ‘English Bread and Yeast Cookery’, but she has slightly altered the recipe, using milk instead of cream and topping the buns with sugar rather than caraway comfits. Helping the idea we have of a Bath bun today. Florence White gives two different recipes for Bath buns in her ‘Good Things in England’ from  1932 – one from 1904 with peel, currants and crushed sugar, and one from the early eighteenth century with sack, rosewater and caraway comfits.

My recipe below is based on that from Elizabeth Raffald from 1769, only I use caraway seeds rather than caraway comfits, because I did not feel like spending hours coating seeds in sugar. When I have oceans of time some day, I will try and make caraway comfits, but for now these buns will do just as they are. Call them lazy Bath Buns. Good as ever spread with a generous amount of sweet butter, but cheddar or gauda cheese is very nice as well. They are more like scones than they are buns, best eaten on the same day of baking them when just cooled. 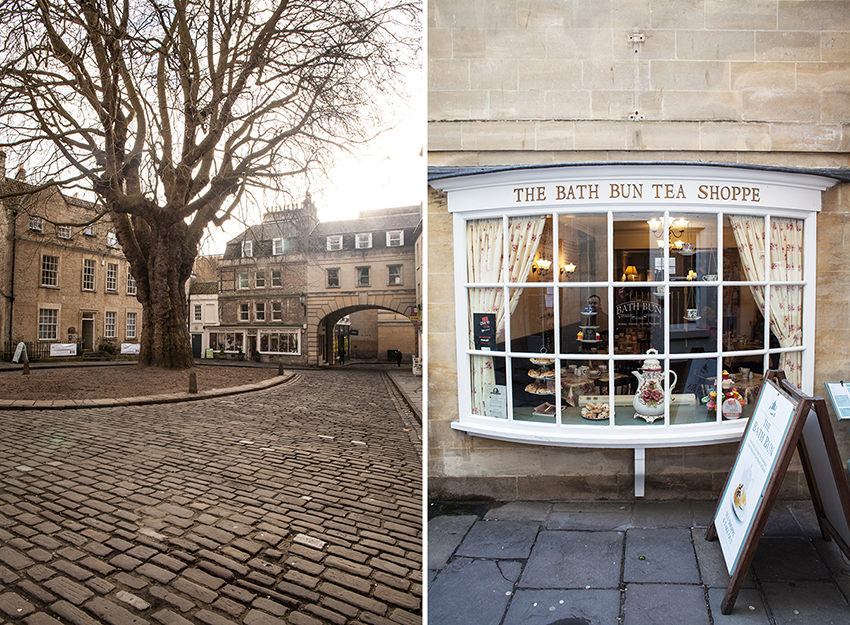 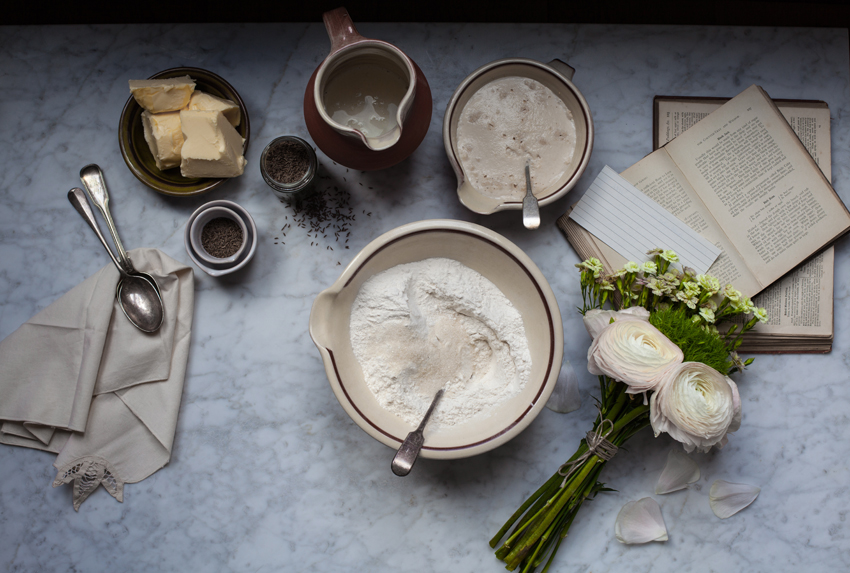 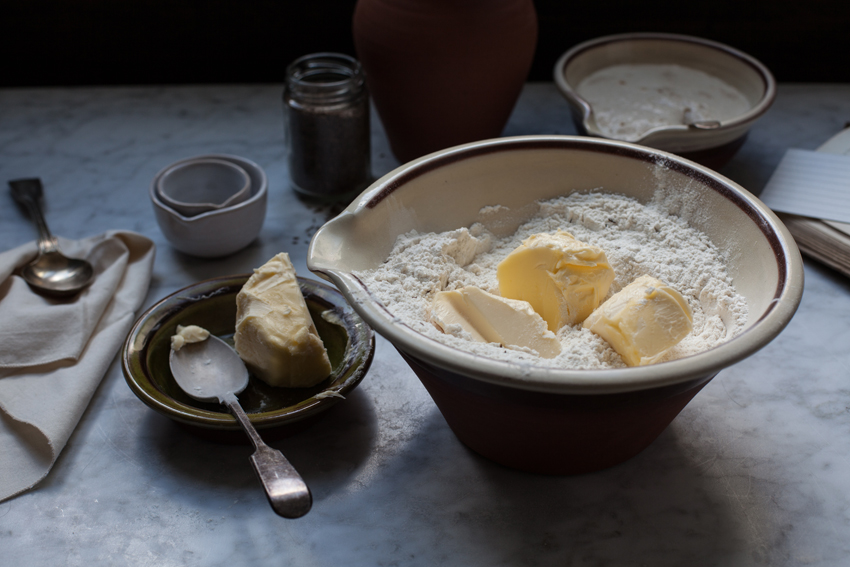 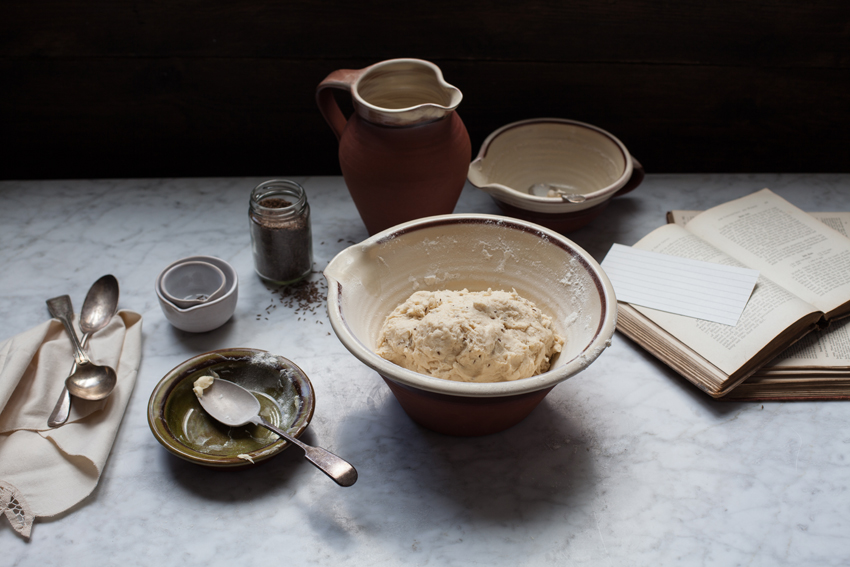 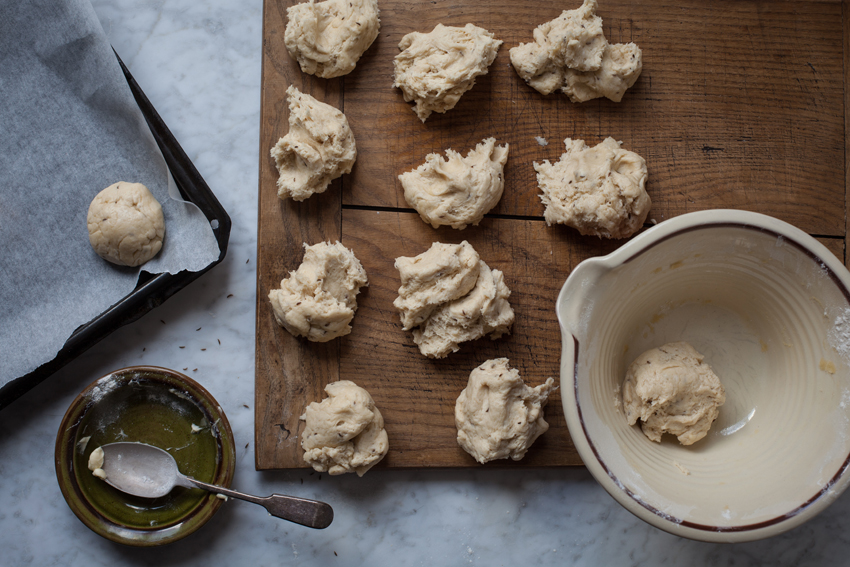 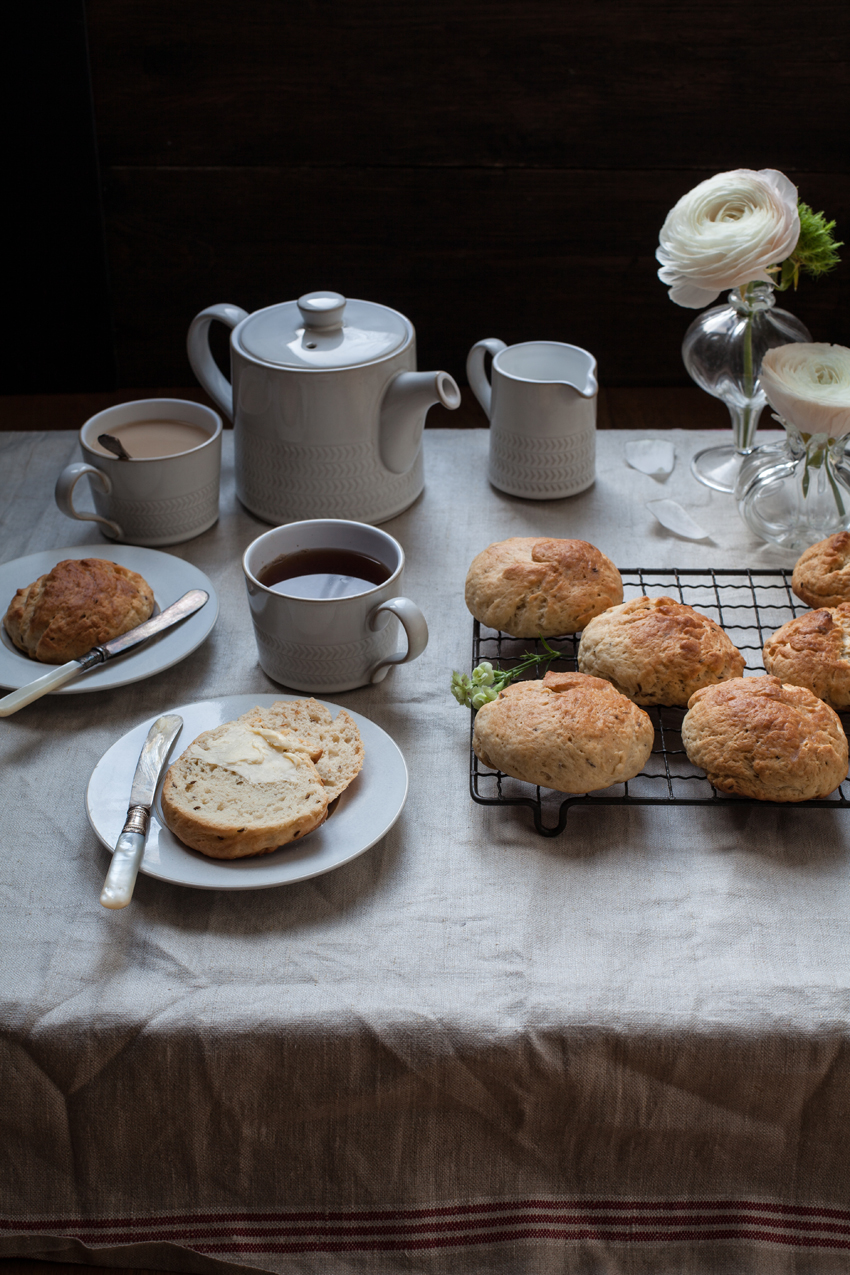 Measure the flour in a large bowl.

Warm the milk, add half the sugar and add the dried yeast. Stir and leave until it starts to react. This is what they used to call a ‘sponge’.

Combine the flour, the salt, sugar and caraway seeds and rub in the butter until evenly divided and the mixture resembles coarse bread crumbs.

Make a well and pour in the milk and yeast, use a spoon to combine then quickly then use one of your hands to knead the dough until the dough releases from your hands. It is a sticky dough, more like a cake batter then a bread batter. Kneading it will make it come together.

Place the dough in a covered bowl and put it somewhere warm to rest for 1 hour to 1,5 hours or until doubled in size. I find that it works best to place the bowl in an oven which you have slightly warmed. The inside should just feel pleasantly warm, like a ray of sunshine onto your skin in summer. If you are lucky enough to live in a warmer climate, you can just place your bowl wherever, covered, preferably with a very funny looking shower cap.

After a nice rest, divide the dough in 12 parts and shape them into buns.

Place on a baking sheet, cover and leave to rest again for 1 hour or until doubled in size.

When reaching the end of the resting time, take your buns out of their cosy warm oven and preheat it to 190°-200° C.

While your buns are in the oven make the glaze by warming the milk and sugar until dissolved.

Bake for 15 minutes in the middle of the oven until they are golden, not brown. Brush the buns with the glaze when they are still warm, generously, because we like shiny buns.

At this point caraway comfits would have been added. If you can find it in yourself to create these most tiny candies, this would be the time to add them.

A winter visit to Bath >
Cornish splits >
The perfect scone >

Previous Post: « Pride and Pudding – the process of creating the Pudding Bowl + pre-order
Next Post: The Rise of Rice Pudding – a History and a 14th century recipe »